Our letters would languish without stamps to get them there!  Have you seen the new stamps yet?  Along with new rates that just went into effect (May 31, 2015) there are some new stamps too!

The new postage rate applies to non-normal one ounce rate – the $0.49 retail price for First-Class stamp did not change.     If you use a rate meter then you will now save 1/2 cent – instead of 49 cents, a one-ounce letter – metered will cost 48 1/2 cents.

The new stamps are being issued between June 1 and June 5th.    They are designated with their rate designation just like first class stamps – think of them as a new type of Forever stamp instead of it stating “Forever” for one-ounce first class, it will state ‘postcard’ for a postcard stamp, etc.   There is one set of designs for postcards, 2 ounce stamps, and three ounce stamps, and a non-machineable surcharge.   There is not an actual amount shown on them. 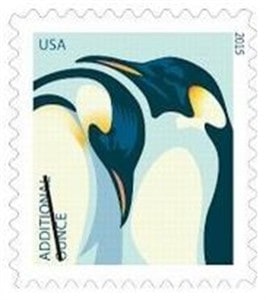 If you click on the links below, each stamp shows the corresponding word ‘postcard’, ‘2 ounce’, etc. describing what rate designation it covers.
Additional Ounce (.22) These are emperor penguins – Pane of 20 and Coil of 100, June 1, 2015.

Today at lunch I was able to try out printing meter stamps with Stamps.com onto my printer with my laptop and was able to successfully print – saving the new 1/2 cent rate on First Class stamp because of it being metered.  The Stamps.com interface is very impressive – I will have a follow-up on it with a blog post soon.  You may recall I had initially sent off for my Stamps.com 5 pound digital scale on March 1, “March Right Up“, and then”Potpourri Update” on March 13th with an update.

The suite of Forever stamps appears to be expanding beyond one ounce.  You will want to try out these new stamps! It will be fun to see them arriving in our mail and with what we send out.