On this Saturday I’ve finally ordered a set of these Mighty Mouse Postcards in Tin Box.

There isn’t much stated about it in the ordering description except to say the Box Set has 30 postcards with 2 each of 15 illustrations.  The size is listed a little over 4 x 6 in size with its own tin box.

Mighty Mouse first started making appearances in 1942, and was in 80 films between 1942 and 1961.  Wikipedia shares those films then made their appearance on Saturday mornings on CBS-TV from 1955 to 1967. 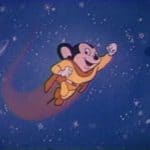 Go ahead, sing along with me, “Here I come to save the daaaaaaay!”