Today’s blog post – the date – is something I have had marked on my calendar for many months because of its historical date – today, October 25, 2015 marks the 600th Anniversary of the Battle of Agincourt which took place in northern France on Saint Crispin’s Day.   The battle is the centerpiece of William Shakespeare’s play, Henry V.

Did you ever see the 1989 British film “Henry V” – the movie was directed by and starred Kenneth Branagh.

Several years ago I printed off the famous speech and have been setting it to memory over the years – included with the passage “We few, we happy few” among its stirring words.     It is one of those speeches I had shared with my Dad that I was memorizing, he loved Shakespeare, and I had hoped to finally have it memorized to recite it to him from memory.   I remember sharing with him how much I loved the movie and was struck by the humility that Branagh portrayed Henry V with when finding out he won the battle.

Today’s blog post includes  images of stamps (some !NEW) and several well written articles about the Battle of Agincourt and the 600th Anniversary today, the text of the famous speech from the play, and the YouTube of the speech from the movie – this way you can read the words along with the speech when viewing the YouTube.

In the movie they would show how messages (think verbal letters) were sent to each other with the French herald ‘Montjoy’ (messenger) – imagine having to memorize and deliver ultimatum messages. 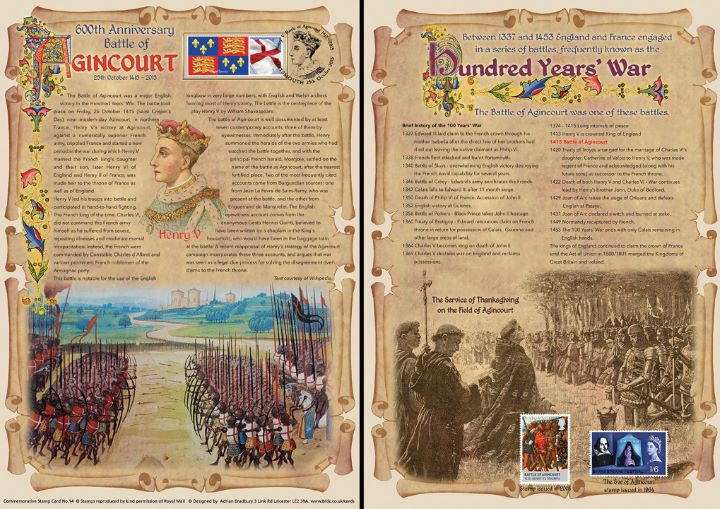 Over on the BFDC – British First Day Covers website they have ‘Battle of Agincourt Stamps’ 25.10.2015 | 600th Anniversary

“The battle of Agincourt was one of the most decisive battles in the 100 Years War between the French and English. The French army greatly outnumbered the English led by King Henry V The ensuing battle was a catastrophic defeat for the French army at the hands of the English archers and army. To commemorate this occasion we have produced this stunning sheet….”

Other articles worth noting:

Here then is the YouTube from the 1989 movie, and below it the text from the play to close out today’s blog post.

“What’s he that wishes so?

My cousin Westmoreland? No, my fair cousin:

If we are mark’d to die, we are enow

To do our country loss; and if to live,

God’s will! I pray thee, wish not one man more.

By Jove, I am not covetous for gold,

Nor care I who doth feed upon my cost;

It yearns me not if men my garments wear;

Such outward things dwell not in my desires:

But if it be a sin to covet honour,

I am the most offending soul alive.

No, faith, my coz, wish not a man from England:

God’s peace! I would not lose so great an honour

As one man more, methinks, would share from me

For the best hope I have. O, do not wish one more!

Rather proclaim it, Westmoreland, through my host,

That he which hath no stomach to this fight,

Let him depart; his passport shall be made

And crowns for convoy put into his purse:

We would not die in that man’s company

That fears his fellowship to die with us.

This day is called the feast of Crispian:

He that outlives this day, and comes safe home,

Will stand a tip-toe when the day is named,

And rouse him at the name of Crispian.

He that shall live this day, and see old age,

Will yearly on the vigil feast his neighbours,

And say ‘To-morrow is Saint Crispian:’

Then will he strip his sleeve and show his scars.

And say ‘These wounds I had on Crispin’s day.’

Old men forget: yet all shall be forgot,

But he’ll remember with advantages

What feats he did that day: then shall our names.

Familiar in his mouth as household words

Harry the king, Bedford and Exeter,

Warwick and Talbot, Salisbury and Gloucester,

Be in their flowing cups freshly remember’d.

This story shall the good man teach his son;

And Crispin Crispian shall ne’er go by,

From this day to the ending of the world,

But we in it shall be remember’d;

We few, we happy few, we band of brothers;

For he to-day that sheds his blood with me

Shall be my brother; be he ne’er so vile,

This day shall gentle his condition:

And gentlemen in England now a-bed

Shall think themselves accursed they were not here,

And hold their manhoods cheap whiles any speaks

That fought with us upon Saint Crispin’s day.”

The British Postal Museum & Archive – ‘By Air, Land and Sea, The Battles of Britain‘ October 16, 2015 by Georgina Tomlinson, Philatelic Assistant

PrevPreviousBack to today
NextWhen we don’t know the answerNext