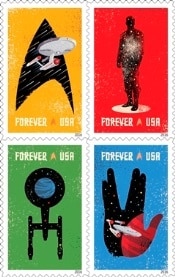 Star Trek stamps are among the new U.S. Stamp designs just announced for 2016!

Welcome to 2016 here at AnchoredScraps.com.   It is fun that yesterday’s blog post included my reference to the  “The Trouble with Tribbles” 1967 episode from the television classic Star Trek.  The Postal Service Previews for 2016 Stamps was announced on December 30th.

The words “SPACE… THE FINAL FRONTIER,” from Captain Kirk’s famous voice-over appear beneath the stamps against a background of stars. The stamps were designed by Heads of State under the art direction of Antonio Alcalá.”

There is also a great article at USA Today on these Star Trek Stamps for celebrating the 50th anniversary.

These are just a few observations for our calendar planning 2016.

The image above of the 33¢ New Year 2000 I ordered back in December from EdelweissPost – for going on a few letters in the outgoing mail tomorrow. All of the other stamps included in the referenced announcement above we will cover some more in future blog posts.

Image upper left U.S. Postal Service #3369 33¢ New Year 2000, issued on December 27, 1999.  Paraphrased from MysticStamp.com – The U.S. Postal Service issued a unique stamp to honor this extra special New Year’s Day for the arrival of the new millennium.  It features the artwork from one of the most popular “Saturday Evening Post” artists – of illustrator Joseph Christian (J.C.) Leyendecker. The image of the New Year’s baby on this U.S. postage stamp was the January 2, 1937.