Today’s blog post is informational about the free email application and for a treat I’ve included the 1955 Ford Thunderbird U.S. Commemorative stamp!

From a sampling of friends I have spoken with recently when sharing with them about Thunderbird email it was news to them too!    If you have recently found yourself greeted with Windows 10 and found setting up their built-in email a bit persnickety to use –  I was happy to be directed to Thunderbird email as a free email option by my ISP.     The Thunderbird free email application was easy to set up and customize, and because it is free means I do not have to spend money on yet another license such as Outlook.

From their website: “Thunderbird is a free email application that’s easy to set up and customize – and it’s loaded with great features!”  On their Thunderbird Features page it includes details on a Mail Account Setup Wizard, One-click Address Book, and Tabbed Email.    Their support page on Set up email – Add and configure your email accounts on Thunderbird – is easy to follow with step-by-step instructions. 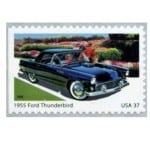 From the USPS website: “Ford introduced the flashy 1955 Thunderbird in 1954 and dubbed it “a sports car with luxury”—a contradiction in terms, since sports cars at that time were built for appearance and performance, not comfort. The Thunderbird featured a steel body, interchangeable hard and soft tops, an overhead valve  V-8 engine, and roll-up windows, as well as a host of luxury options. Styling remained essentially the same until 1958 when Ford converted it to a four-seater.”

There we have it for today.   If you end up using Thunderbird email by Mozilla I hope you too find it easy to install and use.    Join me tomorrow for the half-way mark this week with Wednesday’s blog post here at AnchoredScraps.com!