Dear Professor Einstein is our blog post today as we remember Einstein on his birthday, born on March 14, 1879.   As we start a new week, today’s Monday blog includes includes the 2002 book of the Title “Dear Professor Einstein” that has Albert Einstein’s Letters to and from Children, there are two USPS Stamps with his name, and a movie clip from “I.Q.”

From the reviews I read of this book it described it as having over 60 letters from children to Albert Einstein along with some of the responses he sent. “…often witty and very considerate responses… Enhancing this correspondence are numerous photographs showing Einstein amid children, wearing an Indian headdress, carrying a puppet of himself, donning furry slippers, among many other wonderful pictures…  Obviously, Einstein led a busy life, and so he could not answer every letter sent to him. Nonetheless, he made time to respond to those that touched him in some way. …  To “six little scientists” from Morgan City, Louisiana, who despite the skepticism of their classmates maintained that life would survive even if the sun burned out, he wrote, “The minority is sometimes right but not in your case.””

The image above upper left is of the 1966 8 cent U.S. Stamp from the Prominent Americans Series.  “The 8¢ denomination pictures Albert Einstein.   A brilliant and energetic man, Einstein revolutionized scientific thought. Although best known for his Theory of Relativity, his contributions to science are many. His equation E=mc2 laid the foundation for atomic energy and led to the development of the atomic bomb.” 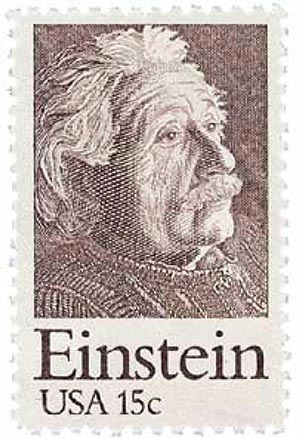 The 1979 15cent US Stamp shown here “marks the 100th anniversary of Albert Einstein’s birth, and commemorates the Nobel Prize winner’s special and general theories of relativity.”

“The important thing is not to stop questioning.”
– Albert Einstein

Did you ever get around to watching the 1994 movie “I.Q.” with Walter Matthau as Albert Einstein, and in the movie Meg Ryan is his niece.   I’m going to close out today’s blog post with this fun scene in the movie where Tim Robbins is taking a test with a little ‘help’ from a few members of the academia unknown to Meg Ryan’s character sitting right next to her Uncle Albert (Einstein).

Image above upper left  USPS Stamp #1285 – 1966 8c Albert Einstein from the “The Prominent Americans Series recognizes people who played important roles in U.S. history. Officials originally planned to honor 18 individuals, but later added seven others. The Prominent Americans Series began with the 4¢ Lincoln stamp, which was issued on November 10, 1965. During the course of the series, the 6¢ Eisenhower stamp was reissued with an 8¢ denomination and the 5¢ Washington was redrawn.” From MysticStamp.com