“This festival is inspired by the 2013 “SpongeBob MailPants” partnership between Nickelodeon and the U.S. Postal Service, a scholastic letter-writing program that used SpongeBob to show kids the fun of writing, sending and receiving mail.” 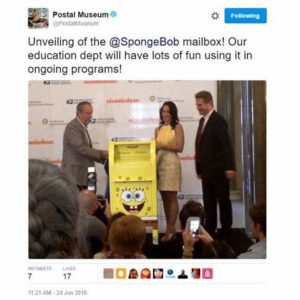 “Family Day with Nickelodeon’s SpongeBob SquarePants also celebrates the induction of a special-edition SpongeBob SquarePants mailbox into the museum’s education collection June 24.    The Postal Service stationed 30 of these colorful mailboxes throughout 13 U.S. cities in 2013 through 2014 as part of the SpongeBob MailPants program.”

The June 25th planned activities from 10am – 5 pm today include:

The sole sponsor of the event is Viacom.  To read the entire Smithsonian Newsdesk News Release for today click here.

From 2013 here is a short video of the transformation to “SpongeBob Mailpants” Mailbox.

Thank you for joining me today for Postal Museum Family Day SpongeBob Mailbox.

Wishing you a Best Day Ever today!  You’ll want to check out this article about “The SpongeBob Musical” that plays through July 10 in Chicago.

Join me tomorrow for my Sunday blog post here at AnchoredScraps.com.

Image above Postal Museum Tweet 11:21 AM – 24 Jun 2016  @PostalMuseum Unveiling of the @SpongeBob mailbox! Our education dept will have lots of fun using it in ongoing programs!

Link to Chicago Tribune article – How SpongeBob SquarePants got his own musical in Chicago June 02, 2016 by Chris Jones – Contract Reporter