And we are looking at the six-minute 2010 TED Talk by the late Omar Ahmad – “Political change with pen and paper”, the impact of handwritten letters to your Representatives.  It is worth making the time to watch it with him giving four steps of how to catch your politician’s attention with your letter writing.

TED Talk by Omar Ahmad 2010 Writing Letters to Your Representatives

Sending special thanks to Tally, one of My Three Muses here for sharing earlier this week the link to this 2010 TED talk by Omar Ahmad. His six minute TED Talk has more than 530,487 total views as of writing today.

“Want your local politician to pay attention to an issue you care about? Send a monthly handwritten letter, says former mayor Omar Ahmad — it’s more effective than email, phone, or even writing a check. He shares four steps to writing a letter that works.”

At the beginning of his TED talk, he mentions President Obama reading 10 letters a day and I was happy knowing back in January it had been blogged here, White House mailroom letters NY Times article.

In preparing for today’s blog post it was sad to learn he passed away a year after making this TED talk, “Remembering Omar Ahmad”. They were able to publish his book, Citizen Advocate, he was working on the next year, with his sister helping to finish his manuscript.

The 15 ¢  stamp shown upper left was one of six different stamps issued commemorating National Letter Writing Week in 1980. Yesterday we saw its companion, Letters Shape Opinions 1980 stamp. If you look at the envelope cachet designs for both of these stamps, one is encouraging writing To The Editor of the newspaper, and the other letter writing To My Congressman.
Thank you for joining me today on this Friday as we head into the weekend.  I’m hoping you will consider putting pen to paper and sending a handwritten letter to an elected official this year.  And if we follow the presenter’s advice it will actually be writing regularly to really make an impact.   I am encouraged by this TED talk that our letter writing can make a difference! 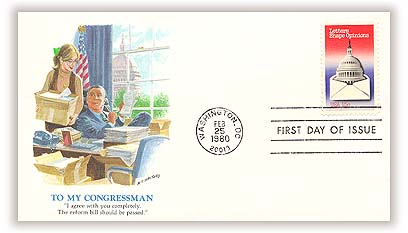 P.S. Write Soon Letter Writing 1980 stamp Attribution & Thank you to the following who are referenced today