For I know the plans I have for you,” declares the Lord, “plans to prosper you and not to harm you, plans to give you hope and a future.

On this Palm Sunday afternoon, we have a special blog post with WWI letters Dear Boys in Service by Frank Skidmore.  Today is my part two blog post for this weekend on World War I letters.

My tears are drying from reading the poignancy and letters of support to young servicemen serving their humble call to arms from 1918. This afternoon I was able to sit down and read the entire book, although it is slim in size, it is packed with historical information that he has beautifully brought to life weaving among the letters the history of its writers.

This past Thursday,  April 6, 2017, marked the centennial for America entering WWI.  Here is a link to yesterday’s blog post on part one, Smithsonian National Postal Museum World War I Letters Exhibit.

Although there is no mention of what would have been the just released song at the time, “Over There” by George M. Cohan (written in 1917), one certainly reads words of patriotism, duty, support, and ardent trusting in God to protect their loved ones serving among these letters.

“…They say if pleasure interferes with your business give up you business. But you are in a business that you cant give up, so you will have to give up your pleasure.  But the pleasure will come to you in the glory of licking the Hun…”

The book gets its title from the series of letters the Pastor wrote to the men serving from Schoharie County during The Great War.  In the letters, he would share how they read aloud each of their names at church service each Sunday at 11am and wanted each of them to know how important they were.   Reading letters that included a letter from a neighbor to Carl Beard Skidmore, a 22-year-old serving in France in the Marines has convinced me more than ever that writing letters of encouragement to those serving is important. I started crying when reading there was one letter sent to Carl that was never received but was instead returned by the CPO marked Deceased and was forwarded. It had been postmarked October 15, 1918.  We later read he died on November 1, 1918.

“He participated in the St. Mihiel offensive and then the Meuse-Argonne Campaign where he was wounded on 1 November 1918 as his battalion was the lead unit that day. He died in the 2nd Mobile Field Hospital later that same day from those wounds.” It goes on to share his body was returned home to be buried.

From what I read over at the worldwar1centennial website,  The Great War ended November 11, 1918, with Germany signing Armistice, here is the link to The Road to War and Beyond Timeline.

Mr. Skidmore has done a beautiful job of weaving history around the family letters of his uncle, Carl Beard Skidmore, who died while serving in France. He included the bio sketches of all those from Schoharie County during The Great War; they are remembered and honored with their names inscribed on the memorial from 1921 at the Old Stone Fort Museum.

There was mention of stationery for one letter was black bordered as the letter writer was widowed. “It was a tradition that widows had a year of mourning when black was called for not only in clothing but nearly all other things.”

Back in January, we covered his first book, Dear Leona by Frank Skidmore.  Today is his second book, Dear Boys In Service, available in Paperback, and ebook. Thank you to Frank for the signed copy of the book he sent me (image above), I’ve now got two copies of the book! I was in awe to see my name included in the Acknowledgments at the end of the book. Frank Skidmore was my former personal business coach before his retiring. Currently at age 75 years young, Frank is working on another book, editing “Dear Momma, Papa and all.”  He makes a call to those reading the book to consider doing the same – of preserving your treasured family letters for others and future generations.

Thank you for joining me this weekend for my two part blog posts on World War I letters. Here’s to continuing to make the time to write and preserve our letters, especially to remember those who have served our country.  In the meantime, should you find yourself with a box of old letters stuffed in a closet, and aren’t really sure what to do with them, email me, or snail-mail write me a letter and we can together look at options.

Join me tomorrow as we kick off the week leading to Easter 2017, and National Letter Writing Month 2017 continues for the entire month of April.  I’m off to go find James Cagney on YouTube as George M. Cohan singing “Over There”. 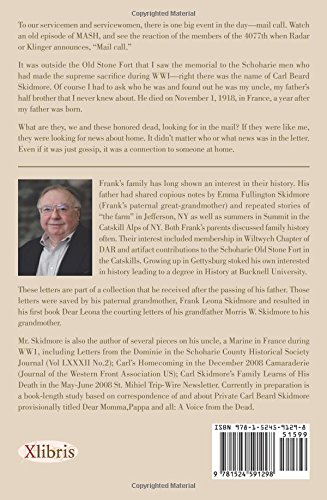 Image from US World War I Centennial Commission  WW1 Centennial @WW1CC #WW1CentennialKC. The Road to War and Beyond Timeline.