With today being Martin Luther King Jr. Day, (and his actual birthday) we are looking at the Freedom Just Around the Corner Exhibit Catalog.  It is available online over at the Smithsonian National Postal Museum exhibit and in a pdf downloadable; that exhibit was from February 12, 2015 – February 15, 2016, at Daniel Piazza.

Both of the stamps of Dr. King I’ve shown here over the past two years are included in the exhibit, and  I’m including at the end of today’s post.

The full title of the exhibit is: “Freedom Just Around the Corner: BLACK AMERICA FROM CIVIL WAR TO CIVIL RIGHTS”.   It is available online – you will especially want to spend time on the Exhibit tab and Resources tab which includes the “Download the exhibit catalog” link. 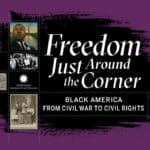 The National Postal Museum’s first exhibition devoted entirely to African American history, Freedom marks 150 years since the end of the Civil War and the abolition of slavery throughout the United States. It highlights letters carried by enslaved Americans, mail sent by and to leaders of the civil rights movement, and original artwork for numerous stamps issued by the United States Postal Service. Nearly one hundred items from NPM’s collection are on display, augmented by outstanding pieces on loan from other institutions and private collections.”

Both of the stamps of Dr. King I’m showing here are in the exhibit.

My sincere appreciation to the Smithsonian National Postal Museum for keeping this and other past exhibits available online.