Among the new 2018 stamps on the horizon this year is the World War I Turning the Tide Forever Stamp.

Back in December, the U.S. Postal Service came out with their Sneak Peek at Select 2018 Stamps.

There are several stamps which I’ll be covering in future blog posts this month as they debut. And of course, it is fine to read ahead and look at that link today!

For today; however,  I am pausing to reflect on such a beautiful design of the USPS World War I Turning the Tide stamp. 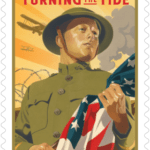 “With this stamp, the Postal Service pays tribute to the sacrifice of American soldiers and millions of supporters on the home front who experienced World War I. Entering World War I (1914–1918) in its later stages, the United States helped turn the tide of war in favor of the Allies.”

Included in Linn’s Stamp News description of this stamp from December: “A forever stamp with the inscription “World War I, Turning the Tide,” shows an American doughboy holding the U.S. flag as the war rages behind him.”

I’m including these two blog posts links from previous posts here on World War I Letter Writing as the theme.

If you get a chance, be sure to read Dear Leona by Frank Skidmore, you can easily read the paperback in a weekend. What better time than during a cold weekend with a warm fireplace? In my blog post on it, the book is from his “… taking the original letters from his grandparents courtship in 1897 and beautifully sharing them in his book!”

And from my blog post, Great War Picture Postcards 1914-1918, I share “My Grandfather was drafted in WWI and was stationed in France serving in the Army Infantry.”  Of the handful of photos I have of him, one includes him in a similar uniform as shown on the stamp.

Thank you for joining me today on this Sunday. Tomorrow we kick off a whole new week. Next weekend if you are in Philadelphia they are having their Philly (Fountain) Pen Show, but I’m getting ahead of myself! I’m looking forward to the Wilmington Philatelic Society meeting this next week getting to see stamp club buddies and hearing new stamp stories! I’m determined today to write a few more Happy New Year greetings to put in the mail on Monday. See you tomorrow!