There is a SpaceX Falcon 9 Crew Dragon Cachet on bid over at eBay catching my attention, especially with yesterday’s historic splashdown in the Gulf of Mexico. 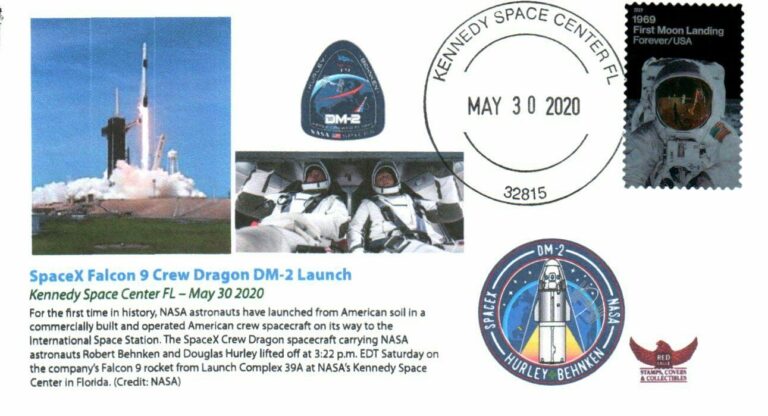 Also, there is a rectangular Postmark of interest in reading the collectspace.com article “SpaceX Crew Dragon docking depicted on new Houston postmark” from June 2, 2020. 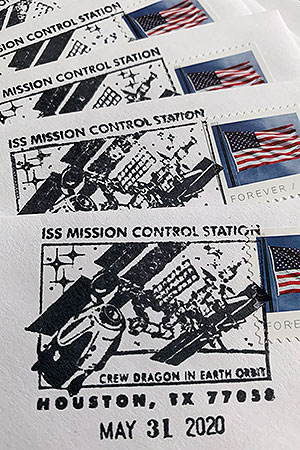 Also, there is a rectangular Postmark of interest in reading the collectspace.com article “SpaceX Crew Dragon docking depicted on new Houston postmark” from June 2, 2020.

“In commemoration of the historic docking — the first by a commercial spacecraft with astronauts on board — and to be ready for the SpaceX missions that are still to come, the U.S. Postal Service (USPS) has introduced a new pictorial postmark depicting the capsule and its destination. The SpaceX Crew Dragon design is now available on request from the Houston, Texas post office that services the NASA Johnson Space Center community.”

The details around the rectangular postmark article has me wondering if it’s somehow possible to still request for them by mail.

“The new SpaceX Crew Dragon postmark has a configurable date, so it can be used for events associated with the current Demo-2 mission or other Crew Dragon flights into the future. The USPS will honor requests for a specific date for 30 days, such that there is time (as of this writing) to still have the postmark applied for the May 31 “Dragonship Endeavour” docking, if desired.”

I’ll definitely be asking my local stamp club buddies about it. Stay tuned!

Furthermore, from SpaceX.com/launches.com, I’m including this excerpt.

“On Saturday, May 30, SpaceX’s Falcon 9 launched Crew Dragon’s second demonstration (Demo-2) mission from Launch Complex 39A (LC-39A) at NASA’s Kennedy Space Center in Florida, and the next day Crew Dragon autonomously docked to the International Space Station. This test flight with NASA astronauts Bob Behnken and Doug Hurley on board the Dragon spacecraft returned human spaceflight to the United States.

After a 63-day stay at the Space Station, Crew Dragon with the two NASA astronauts aboard the spacecraft autonomously undocked and departed from the orbiting laboratory at 7:35 p.m. EDT on Saturday, August 1. Dragon splashed down in the Gulf of Mexico off the coast of Pensacola, Florida at 2:48 p.m. EDT on Sunday, August 2.”

Two weeks from today we will be celebrating Milestone #2000! Today is daily blog post #1986.

As we head into the first week of August 2020, here’s to a great week ahead! See you tomorrow for my Tuesday blog post.

Attribution & thank you to the above listing with links provided