Years ago I know I must have written letters to my pen pal about Yogi Bear – if I didn’t I surely should have back then as I loved to watch those episodes!   I’ve included a short intro video of Yogi Bear at the end of today’s blog post.  There is even a Centennial Junior Ranger Activity Book available for free download from the National Park Service! 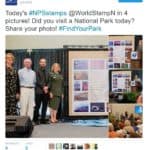 “The National Parks stamps celebrate the more than 400 national parks in the United States—breathtaking vistas and landscapes of unparalleled beauty and also monuments, historic sites, memorials, battlefields, and more.”

“With this sheet of stamps, issued in 2016 to coincide with the centennial of the National Park Service, the U.S. Postal Service® encourages everyone to visit our national parks and discover—or rediscover—abundant opportunities for exploration, learning, and fun.”

“This sheet includes 16 different stamps, all of them showing views of national parks or plants, animals, artwork, objects, and structures found in or associated with a national park. Small type on the margin of each stamp indicates its location.”

#FindYourPark – For a complete listing of locations and photographers click here.   It is amazing to see all the locations listed!

It looks like the National Parks Centennial Stamps would make a great destination list of making sure to have visited all 16 of these locations – and great topics of conversations for writing about in our letters too!