The dedication ceremony is scheduled for 1 PM today.  It is being hosted by the Vietnam Veterans Memorial Fund (On Twitter @VVMF) (program details are at that link) and the National Park Service (On Twitter @NatlParkService).   It is free and open to the public.  It should be noted that close to a dozen Vietnam Medal of Honor recipients will be included.

Medal of Honor: Vietnam War Prestige Folio  – “The prestige folio stamp sheet depicts 48 of the more than 50 living Vietnam War recipients (some chose not to have their name and/or photograph included). The folio, which lists the names of the recipients, is modeled after the World War II and Korean War Medal of Honor prestige folio stamp sheets issued in 2013 and 2014 respectively.”

Both of these quotes shown today are from Memorial Day 2015 Quotes: 20 Sayings To Honor The Armed Forces by Maria Vultaggio  (On Twitter @mariamzzarella) who included them in her respectful article.  She is with the International Business Times (On Twitter @IBTimes) – According to their About Doc the digital news publication reaches over 55 million people every month.

“They are dead; but they live in each Patriot’s breast, And their names are engraven on honor’s bright crest.”  — Henry Wadsworth Longfellow

The Vietnam Veterans Memorial was dedicated on November 13, 1982.  It is a 3-acre national memorial in Washington, DC. honoring U.S. service members of the U.S. armed forces who fought in the Vietnam War, service members who died in service in Vietnam/South East Asia, and those service members who were unaccounted for (Missing In Action) during the War.  The memorial includes the names of over 58,000 servicemen and women who gave their lives in service in the Vietnam Conflict.   The Vietnam War was a protracted conflict between North Vietnam and South Vietnam, beginning in the mid-1950s and ending with the fall of Saigon in the south in 1975.       It has three parts:  the Three Soldiers statue, the Vietnam Women’s Memorial, and the the Vietnam Veterans Memorial Wall:  On the walls are the names of servicemen classified as KIA (Killed in Action), or MIA (Missing in Action) when the walls were constructed. Information about rank, unit, and decorations is not given. The names are listed in chronological order starting with 1959 (I read that it was later discovered that the first casualties were military advisers who were killed by artillery fire in 1957), and moves day by day ending with 1975. 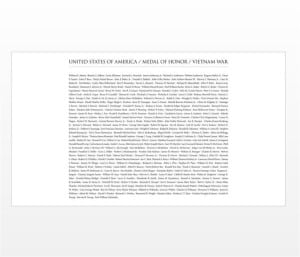 Today let us pause for a few minutes and reflect on the sacrifices others have made as we are grateful for the freedom we experience daily and honor their memory.