The Letters of Noah Webster

Today is Noah’s Webster’s birthday and you have probably already thought to yourself upon hearing the last name Webster, to then think “Webster’s Dictionary” before you have even finished reading this sentence!

At the Today In History at Linns.com it is highlighting: Noah Webster Born Oct 16 along with the 4cent US. stamp issued for his 1958 birth bicentennial.   He was born in 1758, was a lexicographer and published his first dictionary in 1806. He helped to establish Amherst College. 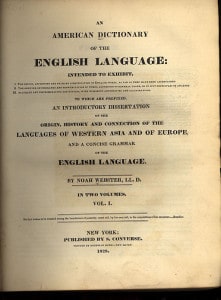 You really should read the full article that Linn’s has put together on him, this is a partial excerpt:

“Webster attended Yale University at age 16. A strong proponent of American independence, he joined the Connecticut militia during the Revolutionary War but did not see active duty. After his graduation he worked as a teacher but also wrote and published articles in support of American independence and the new Constitution. He was also an important voice in establishing copyright laws in the United States that would protect his later work.” …

“After Webster’s death in 1843, his work was purchased by George and Charles Merriam in Springfield, Mass., resulting in the company that today is known as Merriam-Webster, and which continues to publish updated dictionaries and other reference texts.”

These are some of the links to correspondence I came across for Noah Webster:

It was amazing to come across this Letter – George Washington to Noah Webster – July 31, 1788. Image on left of the original hand written letter.   “As you read the following letter from George Washington to Noah Webster, keep in mind that Washington is recounting the events of the summer and fall of 1781 largely from memory (i.e., this document was written in 1788 and is not a primary source for the time it describes)…”

This link to Noah Webster Letters from 1840 has images of “some of the handwritten letters and notes Noah Webster wrote regarding his research surrounding his edition of The Holy Bible. These notes were written on the galleys, or proofs, of his Bible about to be printed. The letters also contain information regarding the printing of the Bible.” 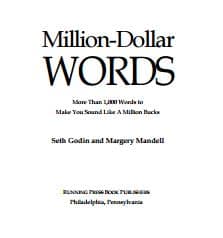 In today’s blog post by Seth Godin it is entitled: “Does vocabulary matter?”   The blog post stresses the importance of continuing to improve our vocabulary.   Seth includes a link for free to download Million Dollar Words written by him 23 years ago with Margery Mandell, which he shares “(Free to share and print, but not to sell or alter)”.

I’m recalling that in the movie “Born Yesterday” we find Melanie Griffith taking on reading “Democracy in America” by Alexis de Tocqueville written in 1838 and along with it while reading it – we see her carrying around a dictionary.

Probably my dollar-store mini dictionary that I have tucked into my old English secretary desk is my favorite dictionary – it will find itself packed along for a scrapbook event – when hand writing in my scrapbook and I want to spell something out correctly the first time if I question it! True we have spell checking apps on our smart phones, but I still prefer having my small dictionary around.   I still have my College Edition Webster’s Dictionary that I have kept on my favorite book case.

Here’s to continuing to expand our vocabulary and when stuck with our words – we know who to thank for being able to look it up!