He just came out with a book “Keep Moving:  And Other Tips and Truths About Aging”.  It is truly amazing and exciting to see him enjoying his life today full of exceptional health.

We immediately think of him with Julie Andrews – as Bert with Mary Poppins, him with Mary Tyler Moore – as Rob and Laura Petrie, and now he has just written a new book.

Yesterday when blogging about the movie “Pocketful of Miracles” it included Ann-Margret – well she and Dick Van Dyke were in Bye Bye Birdie in 1963 – his first film, he reprised his Broadway role.

“Chim Chim Cher-ee” is one of the songs that he performed in Mary Poppins which “won the Academy Award for Best Original Song for the Sherman Brothers, the film’s songwriting duo.  He received a Grammy Award in 1964, along with Julie Andrews, for his performance on the soundtrack to Mary Poppins.  It is wonderful to read he has been recognized as a Disney Legend in 1998. 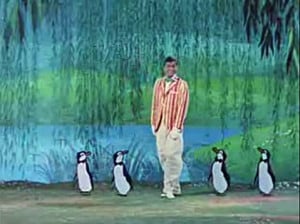 I’m sure you still hear Julie Andrews singing to him from the lyrics of “It’s a Jolly Holiday’:

“Oh, it’s a jolly holiday with you, Bert

Though you’re just a diamond in the rough, Bert

Underneath, your blood is blue..”.

He appeared in the movie “Night at the Museum”, its sequel, and third film in the series.

He has enjoyed an amazing career and what is exciting is to see what he is doing today.   At the Dick Van Dyke & The Vantastix  website it tells of a vocal quartet founded in 2000 with Dick Van Dyke and “vocalists Eric Bradley, Bryan Chadima, and Mike Mendyke to celebrate and promote their lifelong love of singing.”

There is a wonderful article on The Bluegrass Situation website from June 3rd this year entitled “DUSTBOWL REVIVAL ON HOW THEY CONVINCED DICK VAN DYKE TO STAR IN THEIR MUSIC VIDEO”.  It talks about how they were able to have them in their video.

“Be careful not to trip over the ottoman.”
-Dick Van Dyke, My Lucky Life In and Out of Show Business

From the book description: “Van Dyke isn’t just a born song-and-dance man; his irrepressible belief in embracing the moment and unleashing his inner child has proved to be the ultimate elixir of youth. When he was injured during the filming of Chitty Chitty Bang Bang, his doctor warned him he’d be using a walker within seven years, but Dick performed a soft shoe right there and never looked back. ..”

Watching these two recent videos of him today and seeing him in such great health is truly inspiring!   Here’s to wishing each of us  “a jolly holiday…” and to “Keep Moving”!

Reference to Disney Legends on Wikipedia

Excerpt from The Bluegrass Situation website “DUSTBOWL REVIVAL ON HOW THEY CONVINCED DICK VAN DYKE TO STAR IN THEIR MUSIC VIDEO“ June 03, 2015 by Cameron Matthews

Image above of Cover of new book and excerpt of book description: “Keep Moving And Other Tips and Truths About Aging” by Dick Van Dyke from website weisteinbooks.com