It’s Monday and welcome to the third week in the month of December.  Today we are enjoying the unlikely theme of including Disco Music along with our deadlines for getting our packages into the mail.

On this day in 1977 “Saturday Night Fever” had its world premiere at Mann’s Chinese Theater in Los Angeles.   Do you recall th 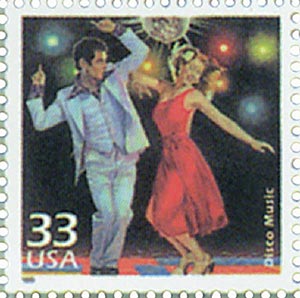 e Commemorative issue of the Disco Music stamp?  I still remember seeing the movie while in College when it first came out and The Bee Gees dominating the radio airwaves with their four #1 pop hits “launched by the movie’s landmark soundtrack album.”

In November 1999 the U.S. Postal Service included in their 1970s Celebrate the Century Series the 33cent commemorative issue of Disco Music stamp with the famous image of John Travolta and Karen Lynn Gorney from the movie.

There is a wonderful article by the late Roger Ebert from March 1999 about the movie of “Saturday Night Fever” and he writes about it being the late Gene Siskel’s favorite movie, having watched it at least 17 times.   “We all have movies like that, titles that transcend ordinary categories of good and bad, and penetrate straight to our hearts. “

Ebert concludes his article with: “We all have a powerful memory of the person we were at that moment when we formed a vision for our lives. Tony Manero stands poised precisely at that moment. He makes mistakes, he fumbles, he says the wrong things, but when he does what he loves he feels a special grace. How he feels, and what he does, transcend the weaknesses of the movie he is in; we are right to remember his strut, and the beauty of his dancing. “Devote your life to something you love–not like, but love,” Siskel liked to say. “Saturday Night Fever” is about how Tony Manero does that.”

“Gene bought the famous white suit at a charity auction. I got to inspect it once. It came with a shirt that buttoned under the crotch, so it would still look neat after a night on the dance floor. I asked Gene if he’d ever tried it on. It was too small, he said. But it wasn’t the size that mattered. It was the idea of the suit.”

Image on left from GeneSiskel.com/the-collector/ website of the white polyester suit worn by John Travolta in the film “Saturday Night Fever” he purchased in 1978. He sold it at a Christie’s auction 17 years later.

Now about those packages…

This week will find us all very busy as there is still time to not only ‘dance the night away’ but also the full work week days and getting Christmas cards actually addressed and into the mail this week, packages wrapped and dropped off.Keep these deadlines in mind – it might help save some money on your package shipping costs!

Here’s to a great week ahead and a little extra spring in our steps as we get our Holiday packages out and on their way!

Excerpt This Day in History, December 14, 1977 “Saturday Night Fever gets its world premiere and launches a musical juggernaut”

Image above from GeneSiskel.com/the-collector/ website of the white polyester suit worn by John Travolta in the film “Saturday Night Fever”