Today the National Park Service with the Pacific Historic Parks was live streaming the 74th Anniversary Commemoration for National Pearl Harbor Remembrance Day; some of the events were live and some pre-recorded and I see they have posted photos from the event today.

Seeing that someone declared today is also “#LetterWritingDay” it seems mentions of letters today should be about remembering and honoring “a date which will live in infamy”. 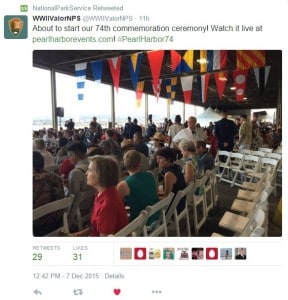 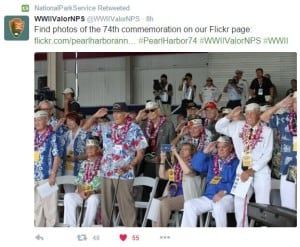 These images are from today @WWIIValorNPS – Official twitter page of the USS Arizona Memorial. World War II Valor in the Pacific National Monument preserves and interprets the stories of the Pacific War.   “About to start our 74th commemoration ceremony! Watch it live at http://www.pearlharborevents.com ! #PearlHarbor74″ 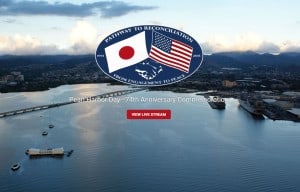 At The National WWII Museum New Orleans there is a letter from someone stationed at Pearl Harbor on December 7, 1941:

“In a world where we take instant communication for granted, it’s hard to imagine what those stationed at Pearl Harbor on December 7, 1941 and their families went through to get in touch with one another in the aftermath of that terrible day…”

The article shares “…Corporal Henry G. Rieth details in a letter to his family back in Boston the lengths he has gone to in the days after the attack in order to let The arthem know he is safe. A subsequent letter vaguely touches on the after effects of the surprise attack including injured friends, heightened security and the loss of his possessions. Most importantly, he stresses that they should not worry about him and hopes that his absence will not spoil the upcoming Christmas holiday…” 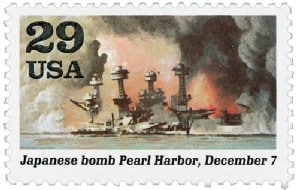 One of the movies I could always count on my Dad watching over the years was “ Tora, Tora,  Tora!”

Today I am not closing my blog post with my usual signature but instead am closing with this excerpt – “Statement from Governor Doug Ducey Lowering Flags for Pearl Harbor Remembrance Day“:

“December 7 is an especially poignant anniversary for the state of Arizona, as nearly half of those killed in the attack were crewmen aboard the USS Arizona. I’m proud and honored to commemorate this solemn but important occasion from the place where World War II began for our nation, and to pay my respects for the 1,177 crew members who lost their lives on the historic battleship named for our state.
“On Pearl Harbor Remembrance Day, let us pause to remember all of the American service members who made the ultimate sacrifice protecting our homeland, the patriotic heroes of our Greatest Generation who answered the call to serve their country in World War II, and the brave women and men who continue to fight for American lives and liberties across the world today. They deserve our highest respect and remain forever in our thoughts and prayers.”
PrevPreviousChristmas Newsletters
Next“The Best Christmas Pageant Ever”Next