Today is the day on 1962 when John Glenn flew the Friendship 7 mission and became the first American to successfully orbit the Earth.  The stamp shown today is the 1962 4¢ Project Mercury Stamp and it was exciting to read its story of how the stamp was created in secrecy connected to the planned flight of the “Friendship 7” capsule.

“I don’t know what you could say about a day in which you have seen four beautiful sunsets.”
– John Glenn

From the Mystic Stamp Company –

“U.S. #1193 features the “Friendship 7” space capsule flown by John Glenn in the first successful orbit of the Earth. The mission was the result of a secret project run by the Post Office Department. The Post Office had recently (at the time) started using a Giori Printing Press, which allowed it to produce stamps in two or three colors in a single run (instead of having to send the stamps through for each color).
In the summer of 1961, the Post Office Department began a special project. The new Giori Press was locked in a separate room accessed only by a small number of postal employees and with a guard to keep others out. No written instructions were given for the project. Rumors in the Department speculated that it was being used to make currency.  Instead, it was printing the “Project Mercury” stamp. 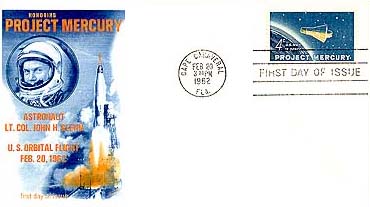 The stamp was sent in sealed packets to postmasters in 305 locations around the country, with specific instructions: “Classified Material. Do Not Open.” The packets were shipped in time for the original launch date – December 21, 1961. Weather caused delays until the end of February.
The secrecy was connected to the planned flight of the “Friendship 7” capsule. The launch was at 9:48 a.m. local time in Cape Canaveral, Florida, and splashed down at 2:43 p.m. At 3:30 p.m., the post offices were informed by telephone,teletype, and telegraph, that they could open the packet and distribute the stamps. If there had been a failure, the stamps would not have been released.
One side effect of the late release was that it gave very limited time to get First Day Covers serviced – an hour and a half, in Eastern states. Cape Canaveral is listed as the official site of the First Day of Issue. There was no Cape Canaveral Post Office until 3:30 p.m., February 20, 1962. That’s when a U.S. Air Force van was made into a temporary post office and called a substation of the Cocoa, Florida, Post Office.”   <– End of excerpt

Searching for the Project Mercury First-Day-Of-Issue-Stamps

Wow! That was such an exciting time for the Project Mercury Stamp to have truly been kept a secret!  There were several articles I came across.  This is a link to a New York Times article from February 18, 1990 Pastimes; Stamps.

And here is a brief excerpt from a great article from February 20, 2012 at Space.com  – Search Continues for Secret Stamp Honoring John Glenn’s Historic Spaceflight

“Fifty years ago today (Feb. 20), John Glenn, the first American to orbit the Earth, relied on ground stations located across the planet to communicate with his control team. But after his Mercury spacecraft, Friendship 7, safely splashed down, it was another type of station that took over tracking his historic mission: U.S. post offices.

For the first and only time in the country’s postal history, the United States Post Office Department — since 1971, the U.S. Postal Service — surprised the public with the release of a secret stamp celebrating Glenn’s successful mission. The 4-cent “Project Mercury” postage stamp was revealed and immediately put on sale in 305 post offices within an hour of Glenn’s triumphant return to Earth at 2:43 p.m. EST (1943 GMT) on Feb. 20, 1962.

Half a century later, collectors are still searching for those first-day-of-issue stamps.”   <– End of excerpt

This YouTube of John Glenn in Orbit shows actual footage

We saw Ed Harris play John Glenn in the 1983 movie “The Right Stuff” – the movie won 4 Oscars.  This weekend will find me having to watch it again!

Join me tomorrow as we continue the weekend and it will be my Sunday blog post.  We are now less than a week away from my one year milestone of blogging daily which will be on February 26th – the countdown has begun!

Image shown upper left and of cover, excerpt from US Stamp #1193 – 1962 4c Project Mercury as shown at Mystic Stamp Company