Remembering Iwo Jima Stamp is our blog topic as today marks the 71st Anniversary of the U.S. Marines taking the crest of Mount Suribachi on Iwo Jima.

It was years ago when I ran and completed the Marine Corps Marathon, having traveled to Washington D.C., and the highlight for me was the final up-hill challenge to the finish at the Marine Corps War Memorial (Iwo Jima Memorial).  The crossing-the-finish-line was a very special experience.

Plans for this coming weekend include me planning to watch Clint Eastwood’s 2006 “Letters from Iwo Jima”, and “Flags of Our Fathers”.

Last April I blogged about having attended the April local Stamp Club Meeting and shared this image of the February 2015 Cover of The American Philatelist magazine which has on the cover of the issue – Uncommon Valor Revisited: Iwo Jima & the Stamp.   That article was originally written in 1995 and it was updated and expanded.  It is one I encourage us all to take a few minutes to read.  It includes photos of the two flag raisings – and shares how that all came about – with the Joe Rosenthal image actually being the second flag raising.  If you do not read anything further in today’s blog post and only read this article in The American Philatelist you will be glad you did!

“To honor the United States Marine Corps on a postage stamp, the Post Office Department chose one of the most iconic images of World War II. The stamp depicts the raising of the American flag over Mt. Suribachi on the island of Iwo Jima. The design of the 3-cent stamp issued on July 11, 1945, reproduces the historic photograph taken by Joe Rosenthal of the Associated Press on February 23, 1945. The fighting on Iwo Jima would last for another four weeks after Rosenthal snapped his famous photo.” 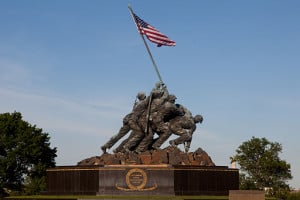