Letter Carrier Barbie is our blog title given The Barbie Doll debuted on this day in 1959.

We’ve got a Barbie whose outfit was made from old carrier uniforms, a Barbie Post Office Playset, and the Barbie Doll U.S. Stamp from 1999.  I still recall in the mid-1960s receiving my very own Mary Poppins as Barbie Doll.  Today’s blog post was already chosen and how much fun it was to see the @PostalMuseum tweet about the Barbie Doll today.

“I thought the Barbie doll would always be successful.” – Ruth Handler 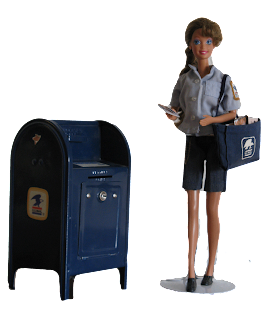 The image of the Letter Carrier Barbie shown is from a 2009 article “Postal Barbie”:

“Frances Holloway, who works in Maintenance in Phoenix, AZ, has a unique Barbie Doll. She’s a letter carrier.
Her outfit is made from old carrier uniforms, so the the fabric is authentic. She has a key chain and that Barbie look.”

Barbie So Much To Do Post Office Playset (1995 Arcotoys, Mattel)

There is a 1995 Barbie So Much To Do Post Office Playset offered at Amazon which includes this in the description: 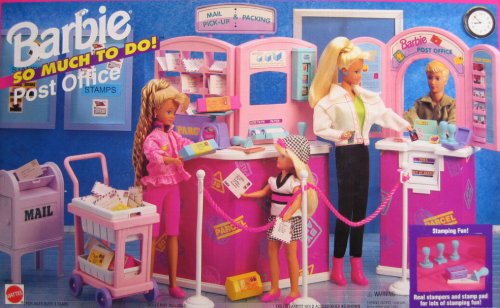 “Barbie So Much To Do! Post Office is a 1995 Arcotoys, Mattel production.

Some Assembly Required. Included items are pretend & intended for Barbie or 11.5″ fashion dolls; Dolls NOT included. Can be used with other size dolls, as preferred…”

The Barbie Doll 1999 stamp shown upper left is part of the 1960s Celebrate the Century Issues.
There is a Classic First Day Cover at MysticStamp.com and it states: “Ruth and Elliott Handler introduced the Barbie doll in 1959, and Ken in 1960.  The couple named the toys after their children.”
Thank you for joining me today for Letter Carrier Barbie.   Join me tomorrow for Thursday’s blog post here at AnchoredScraps.com.

Twitter @PostalMuseum The Barbie doll (http://s.si.edu/1QFWYbW ) made its debut on March 9, 1959 at the American International Toy Fair in New York City.

Image above, and excerpt from Postal Barbie Your Postal Blog June 15, 2009