Happy Monday as we kick off a new week with the New York Public Library Digital Letters Collections.

Later this week the World Stamp Show-NY 2016 will take place with their once-a-decade event scheduled for May 28-June 04 which I will be including in my blog posts.

Their search by keywords is easy to navigate and my search on “correspondence letters” provided all kinds of collections of letters including Mark Twain, Walt Whitman, James Madison, George Washington, and many more.  It is definitely worth checking out!

From their About page –

“Digital Collections contains 679,516 items and counting. While that’s a small fraction of the New York Public Library’s overall holdings, the aim of Digital Collections is to provide context for the materials we have digitized and to inspire people to use and reuse the media and data on offer here to advance knowledge and create new works.”

This brief video on what is involved to digitize is fascinating and they described it as creating “digital surrogates”.

The New York Public Library has its own YouTube channel and I especially liked this 5 minute overview.

Thank you for joining me today for New York Public Library Digital Letters.  I’m closing out today’s blog post with this quote: 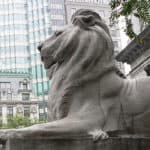 “I don’t believe in colleges and universities. I believe in libraries because most students don’t have any money. When I graduated from high school, it was during the Depression and we had no money. I couldn’t go to college, so I went to the library three days a week for 10 years.”

Image above of “the lion statues outside the Main Branch building of the New York Public Library are among the most famous landmarks in New York City.”  Image by Ken Thomas – KenThomas.us (personal website of photographer), Public Domain, https://commons.wikimedia.org/w/index.php?curid=3684502