The Honeymooners Letter to the Boss

Today we are kicking off our Monday with The Honeymooners Letter to the Boss along with the 2009 commemorative stamp, an endearing episode “A Dog’s Life”, and a link to talk of a musical of “The Honeymooners” is being produced and is “another step closer to Broadway” in a March 23, 2016.

Just as Lucy had her Ethel as side-kick, Ralph Kramden had Art Carney’s Ed Norton and in the episode I’ve included Norton has surely added to the priceless episode.

There is a very detailed explanation of the history of the airing of the episodes of The Honeymooners at History.com and it shares on May 09, 1971, “the last original episode of the sitcom The Honeymooners, starring Jackie Gleason as Brooklyn bus driver Ralph Kramden, airs.”

The Honeymooners Letter to the Boss 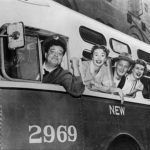 “Ralph comes home in a rage; after driving a bus for the Gotham Bus Company for nine years, he’s been told to turn in his uniform. He is incensed, frustrated and humiliated, and the loss of income has him bordering on panic. Ralph feels cheated and betrayed—both by life and by J. J. Marshall, president of the bus company—so he decides to write Marshall a letter to tell him how he feels after being fired after nine years of loyal service.”

The Honeymooners 2009 U.S. Stamp shown upper left was one of 20 TV shows honored commemorating the Golden Age of Television “on the U.S. Postal Service’s Early TV Memories 44-cent commemorative First-Class stamp sheet.” This set of stamps was first referenced here at AnchoredScraps.com last April with it including the TV show Perry Mason, “Write Away”.

Plot spoiler – Watching mistaken identity of an appetizer that is actually dog food, and Ralph taking a puppy back to the pound and then seeing him melt at the end of this episode will quickly endear itself to you.

If you are rushed going out the door this morning you can swing back by for the 26 minute episode. (UPDATED 10/16/2017 – Link to YouTube The Honeymooners A Dog’s Life episode no longer available.)

Before I close, you’ll want to check out this March 23, 2016 story that a musical of “The Honeymooners” is being produced and is “another step closer to Broadway.”

Here’s to a great week ahead!  “And Awaaay We Go!”

This Day In History May 09 History.com