This year for June 06, 2016 blog post I wanted to share the D-Day Stamp and Letters written after D-Day – from my blog post last year on this date remembering June 6, 1944 the day of the Normandy landings (D-Day) of the Allied invasion of Normandy in Operation Overlord during World War II.

About the D-Day Stamp

Also on June 6, a ceremony was held at the National Postal Museum in Washington, DC, where the miniature sheets as well as the USS Normandy First Day of Issue cancellation were available….”

“In addition to a commemorative sheet, the Postal Service offered the fourth of five golden anniversary stamp collections. The year’s release was entitled “1944: Road to Victory” and featured a forty-page hardcover book that included an overview of the history of the events and subjects depicted on the stamps, two 1944 commemorative stamp sheets, and special mounts for positioning one sheet and individual stamps on key pages….”

My blog post on this day last year was on Letters written after D-Day.  It begins with:

“June 6, 1944 was the day of the Normandy landings (D-Day) of the Allied invasion of Normandy in Operation Overlord during World War II.

Today’s blogpost is sharing this website by PBS with letters written by American soldiers in Europe after D-Day.   These letters are included in the “Letters from the Front” part of the American Experience D-Day website by PBS for the film D-Day”  …  To read my entire blog post from last year click here.

Just like last year’s blog post I am closing today with:
“The words on this plaque “In Memory of the Allied Invasion of Europe on 6th June 1944” is how I’m closing out today’s blog post.  Thank you for reading today’s post with me as we honor their memory.” 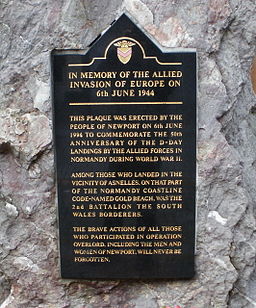