The most famous of all U. S. stamps – the Inverted Jenny Stamp from 1918 made news again – this time at the World Stamp Show-NY 2016 with the $1.35 million sale at auction!  With the once-a-decade stamp show concluding yesterday I wanted to make sure to share about the auction that took place on May 31, 2016.

Add to that on June 02 a missing Inverted Jenny Stamp from 1955 was returned at the World Stamp Show complete with the FBI helping to present it. 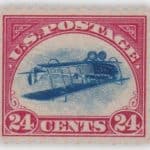 The stamp is one of a block of four stamps stolen at a 1955 American Philatelic Society show in Norfolk, VA. Keelin O’Neill of Ireland, who inherited the stamp from his grandfather, brought the stamp to an auction house in New York City in April to sell. The stamp was taken to the Philatelic Foundation in New York City, where it was discovered that the stamp was Position 76 of the missing McCoy Block. From April to today, a whirlwind of events transpired to provide for the return of the stamp today…..” For entire story click here for postalnews.com article

In addition to sharing the link to the great story by Linn’s Stamp News above about the auction – my stamp club friend Jimmy also shared with me and fellow stamp club members before the World Stamp Show began that “Robert A. Siegel Auction Galleries has developed a website devoted to the 24 cent “Inverted Jenny” Airmail stamp. The amount of information on the stamp is amazing. Two of my favorite are the section on “Production” and the reconstructed pane made from photographs of each stamp shown in it’s correct position.     This is a must read if you have an interest in the most famous of all U. S. stamps.”

You may recall in the Richard Pryor movie Brewsters Million a Inverted Jenny Stamp made an appearance where he buys the rare stamp and then posts it!  Note – Although in the movie it claims it is the only one known Inverted Jenny Stamp to have survived that is incorrect – see the sale records here.

After watching that movie clip the next time I get a postcard I’m going to double-check the stamp used on it!   Thank you for joining me for these past days with the World Stamp Show as our focus.  Join me tomorrow for kicking off the new week and encouraging us to write more letters – and having fun with all the new stamps to put on them!