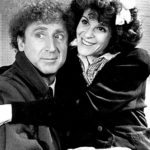 There is a nice write up from a few hours ago on NPR Gene Wilder, Star Of ‘Willy Wonka’ And ‘Young Frankenstein,’ Dies.  And over at GeneWilder.net it has pages on his movies, books, biography, and awards.

The University of Iowa Libraries has online a collection of materials The Gene Wilder Papers.  The collection dates from 1961? to 2000.  It was posted to the Internet 2001, with an Addenda 2001-2003.  The Scope and Contents Note shows box IV “Correspondence and Documents” with Gene Wilder – Gilbert Pearlman correspondence.  Note to self – it is important to note that the materials while listed online are only available in the the Special Collections Department.

Last May my blog post on Pure Imagination included the following.

“The song “Pure Imagination” is sung by Gene Wilder.  One can go to YouTube if you do not have the DVD and watch Gene sing the song – it is truly captivating and the way I like to envision Gene will be remembered a hundred years from now.” …

“If you have not seen the original movie with Gene Wilder you really should, after you’ll never watch another version (including music videos) without thinking of Gene in his colorful wardrobe singing and dancing as only he does in this movie!”

I’m closing out today’s blog post with this YouTube of Gene Wilder singing Pure Imagination from the movie Willy Wonka & The Chocolate Factory in 1971.   It truly inspires our imagination!

GeneWilder.net   It includes his movies, books, biography, and awards.