Making time for the dog days of summer 2016

On this Sunday we are pawsing – Making time for the dog days of summer 2016.  We’ve got the story of  Owney – the Railway Mail Service Mascot from the late 19th century.

Earlier this month we covered the US Postal Service debuting the New Pets Forever Stamps on August 2nd.   On Friday of this weekend, August 26, it was National Dog Day 2016.   Today, Sunday August 28th is #rainbowbridgeremembranceday.

Over at the National Postal Museum one can find out all about the unofficial mascot with Owney the Railway Mail Service dog in the late 19th century.  Owney is described as having been a scruffy mutt! 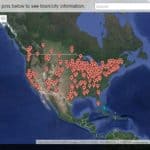 This was one very well traveled dog!  Looking at this map of Owney’s Travels in the USA and Canada one sees he got around!  “In 1895 Owney made an around-the-world trip, traveling with mailbags on trains and steamships to Asia and across Europe, before returning to Albany.”

Owney was celebrated with his own USPS commemorative stamp in 2011.  He was showcased on a Forever stamp – shown here.

If you haven’t already seen it, here is the short video of Owney’s story.

Thank you for joining me today.  Today’s blog post is number #550 daily blog posts since launching this blog on February 26, 2015.

Tomorrow we kick-off the last week in August with our Monday blog post. Here’s to remembering our pets now and before, keeping all of their loved memories with us forever!