On this Saturday morning, we are Remembering June Foray Voice of Rocky the Flying Squirrel who earlier this week passed away at the age of 99 years old.  Today’s blog post is one I will be printing and sending along with a note to a few letter writing friends.

One of my all time favorites continues to be her being the voice of Rocky the Flying Squirrel.

Among her other voices, they included Boris Badenov and Natasha Fatale, Cindy Lou Who in “How the Grinch Stole Christmas,”; Granny for Tweety Bird and Sylvester; and Grandmother Fa in “Mulan”.  The AP has a very detailed article: “June Foray, voice of Rocky the Flying Squirrel, dead at 99.”

Earlier this week I learned of the passing of June Foray from a tweet by David Derks; I had begun following him after writing my post on the “Rocky & Bullwinkle Savings Stamp club” back in 2015.  He’s also got a great photo of him with June posted here. 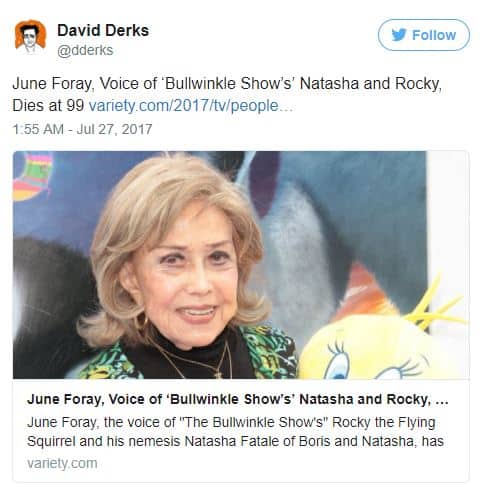 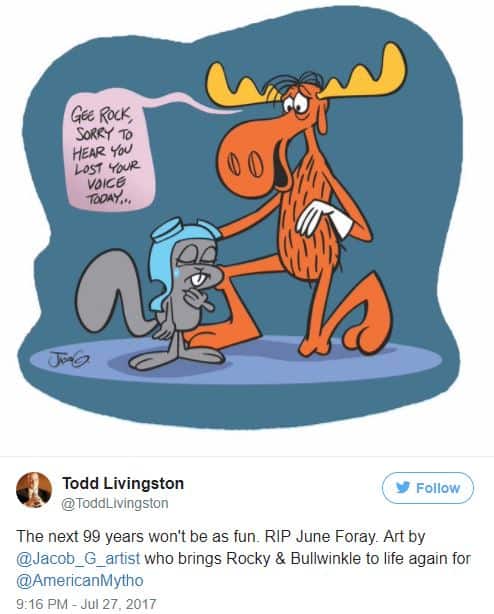 I’m closing today’s blog with this quote from my post from the “Rocky & Bullwinkle Savings Stamp club”.

Attribution to the following who are referenced today –

IMDb quotes for Rocket J. Squirrel (Character) from The Adventures of Rocky & Bullwinkle (2000)