With the email arriving in my inbox this afternoon about PreOrdering Royal Mail 2017 40th Anniversary Star Wars Stamps, it was perfect timing! With watching the Weather Channel this evening focusing on predicting Hurricane Irma’s path it is nice to take a break and write today’s blog post encouraging letter writing.

The email was from the British Stamp Service in North America. Over at their website it includes: “Just announced: Pre-order Royal Mail’s brand new 2017 STAR WARS™ Official Collection now!   Hang onto your lightsaber… STAR WARS: THE LAST JEDI is blasting its way onto movie screens this December. To celebrate the new film, as well as the 40th Anniversary of STAR WARS™, we’re thrilled to announce that on October 12th, Royal Mail is issuing brand new official STAR WARS postage stamps, plus a wealth of limited-edition collectibles. “

This is the link to Royal Mail itself!

Back in October 2015, I had a blog post about Great Britain’s stamps to commemorate Star Wars & upcoming film. 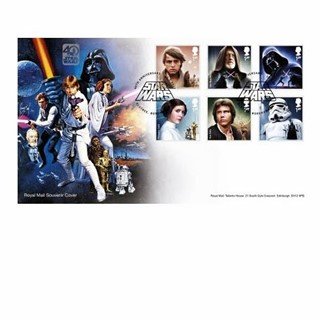 “This is the Cover you’ve been looking for. The extraordinary 40th Anniversary Official Souvenir Cover from Royal Mail celebrates 40 years since STAR WARS™ began in 1977. It showcases all six stamps from the 2016 STAR WARS stamp issue which depicted characters from the original film: Luke Skywalker, Princess Leia, Han Solo, Obi-Wan Kenobi, a Stormtrooper and, of course, Darth Vader. …

It gives the details for preordering. Enjoy exploring!

Attribution & Thank you to the following I’m referencing today –