Baseball Letters: A Fan’s Correspondence With His Heroes

On this Sunday morning, we are looking at the 1996 book Baseball Letters: A Fan’s Correspondence With His Heroes by Seth Swirsky.

Tonight is Game Five of the 2018 World Series between the Boston Red Sox v the Los Angeles Dodgers. As of Game Four last night Boston leads 3-1. 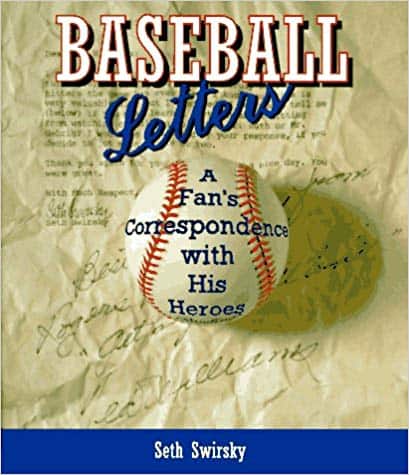 Baseball Letters: A Fan’s Correspondence With His Heroes

The hardcover has 179 pages and includes 90 photos.

Over at AbeBooks.com it has this helpful synopsis.

“Baseball Letters did not start out as a book. When the baseball players went on strike in the summer of 1994, Seth Swirsky, missing the game he loved, wrote letters to hundreds of players — past and present, famous and not so famous — asking interesting questions pertaining to their lives and careers. To his amazement, almost all wrote back. In this book are those letters, reprinted as they were received by the author. Baseball Letters is a modern classic that provides fans with a human connection to their heroes.

Among this treasure trove of letters:
Cal Ripken, Jr., reminiscing about how baseball drew him closer to his father.
Ted Williams revealing the best batting tip he ever received.
… Woody English challenging the legend of Babe Ruth “calling” his famous home run shot in the 1932 World Series.
Dave Stapleton wondering why he wasn’t put in the field for Bill Buckner in game 6 of the 1986 World Series.”

Thanksgiving 2018 is less than a month away

In three weeks we will be in full preparation for Thanksgiving. It is hard to believe it is less than a month away to November 22nd. This year there are five Thursdays in November 2018. As a reminder, Thanksgiving is always celebrated on the fourth Thursday of November.

Join me tomorrow as we kick-off the new week that includes Halloween on Wednesday.

Baseball Letters: A Fan’s Correspondence With His Heroes, Image, excerpt

You may also enjoy AnchoredScraps