Before beginning, my thanks to Jimmy with the Wilmington Philatelic Society for his presentation at the WPS June meeting last night. 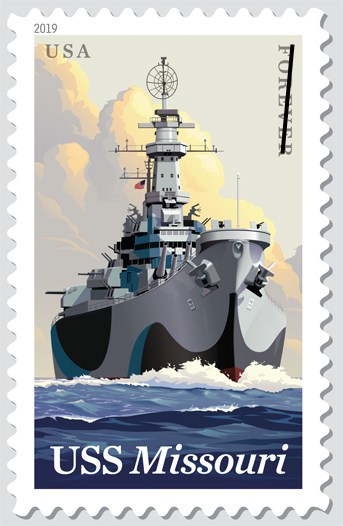 Yesterday was the 75th Anniversary of the commissioning of the USS Missouri, the last American battleship, on June 11, 1944.

“HONOLULU — On the 75th anniversary of her commissioning, the famous American battleship USS Missouri (BB-63), will sail again via the nation’s mailstream with the issuance of the USS Missouri Forever stamps.  The U.S. Postal Service dedicated the stamps today during a ceremony on her deck pier side in Pearl Harbor. The public is asked to share the news on social media using the hashtag #USSMissouriStamps.”…

The stamp art depicts USS Missouri from a low vantage point almost at sea level, cutting through the water at a moderate speed commensurate with entering or leaving port. Large and imposing in the frame, USS Missouri is shown in the disruptive camouflage she wore from her commissioning until a refit in early 1945. Clouds loom in the background, tinged with gold and rose from the sun’s rays.”

It includes a video from the First Day of Issue ceremony.

The USS Missouri Forever 2019 Stamps are available online at the USPS Postal Store for SKU 478704. The sheet of 20 is $11.00 for First-Class one-ounce Forever stamps. Be sure to explore their souvenir items from the Ceremony too. 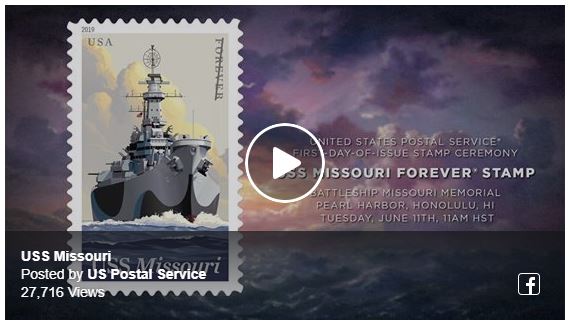