It is a delight to see there is an Apollo 11th Launch 50th Anniversary Pictorial Cancellation available for 60 days (this is not the normal 30 days!)

First, finding a good image of the Apollo 11th Launch 50th Anniversary Pictorial Cancellation took some digging. The best image of it I am seeing is over at the CollectSpace.com posting by Robert Pearlman, Editor from June 5, 2019. Also, they proactively mention the address for requesting it is subject to change and to keep monitoring updates.

Third, the USPS Bulletin is showing the July 16 Apollo 11 Launch image. The image for it at CollectSpace is much more vivid in detail. 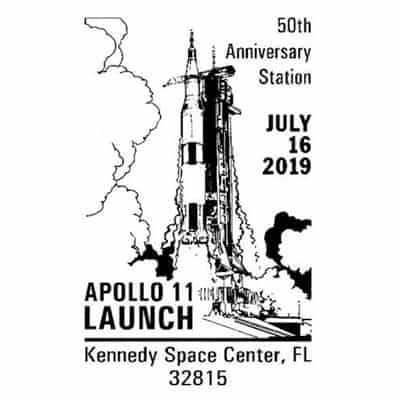 As we wrap up, I’m wanting to go ahead and mention later this week we will be looking at the upcoming 1969: First Moon Landing Forever stamps on July 19th celebrating the 50th anniversary. If you are doing a double-take on that date, the USPS is issuing the day BEFORE the iconic historical date commemorating the 50th at the Kennedy Space Center.