In writing today’s blog post on the Ayn Rand 33c Stamp, I learned she enjoyed stamp collecting, “with particular interest in issues from the Ryukyu Islands and Iceland”. Also, I would be remiss in writing about her if I did not mention her 1957 novel, Atlas Shrugged. 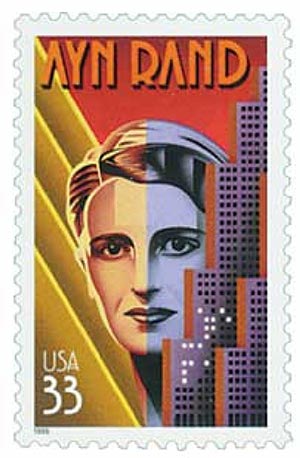 Worth noting for today (as a footnote when re-reading years from now), while normally April 15 is the deadline for filing with the IRS, with this year with the Coronavirus Pandemic, the deadline is July 15, 2020.

While looking for my hardback first edition of Atlas Shrugged, today, I finally remembered it is on loan to a friend. As I recall the classic is over 1100 pages!

I still vividly recall it being described to me by someone very dear as it is about three things. One, a great mystery figuring out where the people are disappearing to who were running successful businesses; Two, a compelling love story; and 3) a wonderful tribute to capitalism.

If you find yourself looking for a book to read while stay-at-home, I hope you’ll undertake reading it. As I recall the first 100 pages were pretty dry but after that well worth it. I remember reading it from cover to cover in two weeks several years ago!

Between 2010 and 2014, a three-part film series was made based on the book. Watching it was like seeing a ‘highlights reel’ and I was filling in all the background around it to myself recalling the plot from the book. I still am very glad to see it is available as a three-part movie.

As far as reading other books by Ayn Rand or seeing any other of her movies there are two. First, Anthem (1938) was on the required reading list during my Junior year in High School.  And several years ago I recall seeing the movie The Fountainhead. The book was written in 1943. The film based on the book in 1949 stars Gary Cooper, and Patricia Neal. 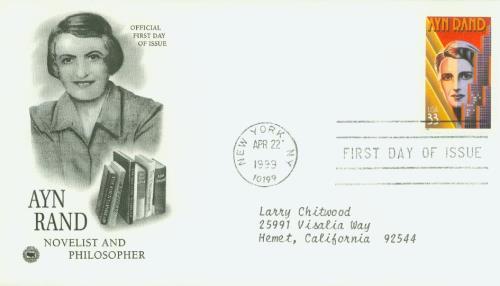 The stamp issue date was on April 22, 1999. There are several first day covers, which I’m including this one. It is amazing it is available for only $2.25!

The following excerpt is from Mystic Stamp.

“Born in Russia, Ayn Rand (1905-1982) experienced both the Kerensky and Bolshevik revolutions. During her years there, she witnessed the increase in Communist control and disintegration of personal freedoms. After studying philosophy and screen writing in Russia, Rand obtained permission to leave the country in 1925. She arrived in the United States the next year.
…
Ayn Rand’s two best-known novels present a moral and political philosophy based on individualism and self-interest. In The Fountainhead (1943), an architect destroys a housing project because his design was changed without his knowledge or consent. In Atlas Shrugged (1957), a strike by the men of the mind proves society can’t survive without creative genius. Both books are still in print, with combined sales over 10 million.”…

The Mystic Stamp write up continues with sharing about Ayn Rand’s interests in Stamp Collecting.

“Ayn Rand was also a stamp collector, with particular interest in issues from the Ryukyu Islands and Iceland. In an article she wrote for the Minkus Stamp Journal in 1971, Rand noted that the 1898 $1 Western Cattle in Storm stamp was among her favorites.”

In closing, I’m thinking I definitely need to go round up my copy that is on loan once everyone is back out and about again. See you tomorrow!

You may also enjoy AnchoredScraps Vintage postcard Everybody should pay taxes … April 15, 2019