It was a real treat to begin work earlier today, Sunday, with a neighbor on a quilt to remember Cuddy.    Today’s blog includes the 2006 “Quilts of Gee’s Bend” commemorative postage stamps, 39 cents – the sixth in the American Treasures Series, and from 1978 the four stamps for the commemorative set “American Folk Art” Quilts, 13 cents.

We have determined the quilt blocks will be 8 x 8.  Each quilt block is actually two triangles – two dog bandanas which are being cut (with rotary blade) down to create this size but keeping the bandana “look”.   Over the past several years I collected dog bandanas from each time Cuddy would make a trip to be boarded, groomed, and/or dog-day-care he would emerge wearing one when picked up and would wear for a day and then it would get washed and put away.   From the beginning of these bandanas showing up I started keeping them and thought “one day I will make a quilt for him out of all these bandanas”.  This past Thursday I rounded them all up from two different stashes and they total 69 in number!

Stay tuned for photos as this project is now underway.  I am most appreciative of all the help and guidance my neighbor is helping me with getting this quilt made.  In looking for digital embroidery of a Brittany Spaniel (to include one on the quilt) I could not believe the likeness of one of the designs that we purchased and downloaded earlier this evening.    Plans are once done the quilt will be on display at what was his second home where he would visit for boarding and dog-day-care! 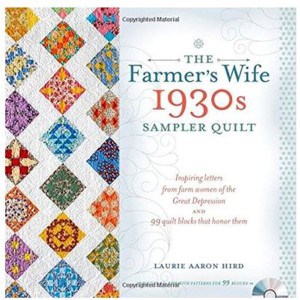 Back on June 27th my blog post was on ‘The Farmer’s Wife 1930s Sampler Quilt: Inspiring Letters …’ and that book recently arrived and is a delight to pour over!  As mentioned then “…Laurie Aaron Hird’s new book commemorates the strength and hope of the farm women of the Great Depression.   The 99-block queen-size sampler quilt inspired by these letters uses reproduction 1930s fabrics”…   This paperback book is 8 x 8 square and I love reading each letter that has been selected to accompany each quilt block – and the patterns are provided on a CD for the 99 blocks.

These stamps are the sixth in the American Treasures series that showcases beautiful works of American fine art and crafts.

Art director Derry Noyes chose photographs of ten quilts created, between circa 1940 and 2001, by African- American women in Gee’s Bend, Alabama. Created for the practical purpose of keeping warm, the quilts of Gee’s Bend are noted for their unexpected color combinations, bold patterns, and improvised designs. The variety of materials with which they are made – including old dresses and worn-out work clothes – also demonstrate great ingenuity.”

And from the USPS Stamps website this article February 04, 2012:  “THE QUILTS OF GEE’S BEND SPEAK ELOQUENTLY OF LIVES LIVED” :

“…Today outside interest in the quilts of Gee’s Bend is growing.  Art historian William Arnett and his son Matt began collecting the quilts in 1997…”

“The four stamps that make up this set of stamps together make up a design that is repeated over the total pane of stamps. Thus, the pane itself takes on the appearance of a small quilt. Quilting is a needlework technique used to hold a layer of insulating or padding material between two outer layers of fabric. To prevent the interior layer from shifting, numerous runs of stitches lie across the sandwiched layers. Several types of quilting are known. Wadded quilting is evenly filled with thick padding. Flat quilting has little or no padding. Trapunto has parts of the design raised by being heavily padded. Corded quilting, also known as Italian, features heavy yarn threaded between double rows of stitching. Patchwork quilts were an extremely popular form of folk art in preindustrial America.”

Do you have a quilt that someone made for you?  Have you thought of making one yourself?  If you know the person who made the quilt you enjoy (or your made a quilt that is with you or with someone you gave it to as a gift) perhaps you could round up a letter for the quilt or write one yourself to keep the story associated with that quilt – to keep its story active.  There appears to be several articles on making a quilt label.   This one: “Signed, Sealed, Delivered: Making A Quilt Label That Lasts” I liked with its step-by-step instructions with photos.

Stay tuned as I will have updates here on this new project.  Join me tomorrow as we kick off a new week!

Image: 2006 U.S. stamp “Quilts of Gee’s Bend” Issue – it is the 39cent Medallion with Checkerboard Center Single.  At the Arago web site.  @PostalMuseum

YouTube: “How to make an American quilt” posted by Clara Darko