Today, November 10, the Marine Corps is celebrating its 240th birth date and on this day in 1969 Sesame Street debuted.

Today I wanted to share a book I came across with the “incredible true stories written by one marine as a combat correspondent in the Pacific during World War II as shared through his dispatches, letters, … the only known collection of any World War II combat correspondent’s writings”; there is a wonderful “Elmo loves stamp collecting” booklet in pdf to explore; and this short YouTube from April with the Marines and Sesame Street celebrates Marine Corps Kids. 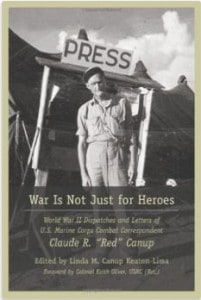 This 264 page book from 2012 received a 100% rating from all six reviews:  War is Not Just for Heroes: World War II Dispatches and Letters of US Marine Corps Combat Correspondent Claude R. “Red” Canup.

Filling a gap in the history of U.S. Marine Corps aviation history, War Is Not Just for Heroes rescues the incredible true stories written by one marine as a combat correspondent in the Pacific during World War II as shared through his dispatches, letters, diary entries, personal notes, and tapes.

At a time when the average recruit was a strapping, healthy eighteen-year-old male fresh out of high school, the U.S. Marine Corps began recruiting experienced reporters who formed the coalition of hard-hitting, frontline journalists known as Denig’s Demons. These men combined their combat training with their years of newsprint experience, establishing the impregnable power and prowess of the U.S. Marine Corps and the portable typewriter. Armed with their rifles and skills, combat correspondents reported what was often the only news from Pacific islands. Writing about heroic missions and daily activities from war zones, marine combat correspondents linked marines back to their hometown communities… 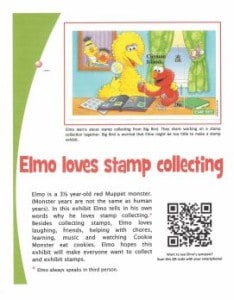 This 16 page pdf from the American Philatelic Society (Stamps.org) of “Elmo loves stamp collecting” is wonderful with “Elmo learns about stamp collecting from Big Bird.   They share working on a stamp collection together.   Big Bird is worried that Elmo might be too little to make a stamp exhibit.”   It includes images of the September 2005 United States Postal Service stamps that “showed some of Elmo’s friends and of Big Bird featured on a United States “Celebrate the Century” series stamp from 1999.

It was fun to come across this YouTube: Sesame Street’s Rosita Celebrates Marine Corps Kids

Thank you to Ellen, one of My Three Muses, with help on today’s blog post title and for the suggestion for a future blog post to include the wonderful Marine Toys for Tots Foundation.   Wishing you a great day!    Join me tomorrow as we Remember Veterans Day Honoring All Who Served.

Image above of Cover and Excerpt from Book: War is Not Just for Heroes: World War II Dispatches and Letters of US Marine Corps Combat Correspondent Claude R. “Red” Canup, May 15, 2012 by Linda M. Canup Keaton-Lima (Author), Keith Oliver (Foreword)