Hollywood Vintage Postcards is today’s Sunday blog post with tonight being the 88th Academy Awards – the Oscars!  It will be held at what was the Kodak Theatre now known as The Dolby Theatre to be hosted by Chris Rock.  And I’ve included in today’s blog post a look back at last year with Julie Andrews at the Oscars and Lady Gaga’s performance singing a “Sound of Music” medley.

In the book “Hollywood 1900-1950 in Vintage Postcards” it draws on a private collection of vintage postcards for half a century.  “From the familiar sights of Metro-Goldwyn-Mayer Studios and the ChinesTheater, to the horse-and-buggy driven dirt roads and pineapple fields at the turn of the century, Hollywood in Vintage Postcards will guide the curious through the city’s progress in the first half of the 20th century.” 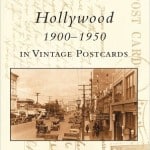 The book is also available in a Kindle Edition.   The book is definitely one I’m going to be adding to my collection.

It was just last year at this time that I wrote in my blog post about “Julie Andrews making a surprise appearance at the Oscars following Lady Gaga’s performance singing a “Sound of Music” medley celebrating the movie’s 50th anniversary.”  This YouTube shows the entire segment including at the beginning highlights from the movie.

Here’s to a fun rest of our weekend!   And now the envelope please……