This morning in reading today’s entry for Daily Guideposts 2016 it talked about St. Patrick’s Day and shared the contributor’s observations about having “discovered that Patrick wasn’t Irish either”.  It goes on to talk about how when Saint Patrick was sixteen his village was raided and ended up being sold as a slave and brought to Ireland for six years before escaping.  Later while in seminary in France studying for the priesthood it shared how he had strange dreams that began and he ended up returning to Ireland for thirty years traveling throughout the island in ministry.   The message was about turning wrong into blessing.

“Also included in this volume is the only other document known to have been written by Patrick, a letter he wrote to the soldiers of Coroticus–also Christians–who had raided parts of Ireland and taken away prisoners who were then sold into slavery.  This letter is a wonderful demonstration of Patrick’s rhetorical fire… and the results are every bit as autobiographically revealing as the Confession.”  (End of Excerpt)

If you find yourself not wanting to order the paperback or check on its availability at the library, it is available on Kindle for less than one dollar. 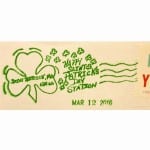 Back on March 4th I shared about the St. Patricks Day Special Fancy Postmarks available through two different Post Offices.   In sending out a few St. Patrick’s Day cards I included sending one to myself so we could have one of these Special Fancy Postmark too!    It arrived earlier this week and it is really nice – including having it stamped in green ink!  I’ve included a photo of it here.  Thank you to the Kahoka, MO Post Office for their beautiful job done and going the extra mile to have it approved for the color green ink with the postmark.   And Thank you to my stamp club friend Jimmy for having helped explain the process so well for sending in my cards to have them get the special fancy postmarks. It is a lot of fun and hope you will try it.

Wishing you a Happy Saint Patrick’s Day!    Join me tomorrow for my Friday blog post as we approach the weekend.

Image above of Cover and excerpt: The Confession of Saint Patrick and Letter to Coroticus Paperback– February 17, 1998 Translated by John Skinner, Foreword by John O’Donohue