Today we are covering a fun story on the 2012 100th Anniversary First North Carolina Air Mail Flight; it is in follow-up to my blog post from this past Thursday, on Stale Mail Airmail Letter.

Thank you to my local stamp club buddy Jimmy for sharing the scans from his personal collection of envelope commemorative covers and for sharing!

In my blog post on Thursday it included a story about “The Smithsonian Magazine article from August 2006 recalls the story from 1859 with a “delivery lighter-than-air mail” via hot-air balloon.”
In follow-up, this is the Jupiter Balloon Airmail Flight Stamp.   The #C54 stamp “commemorates the 100th anniversary of the first carriage of airmail in the United States on the hot-air balloon Jupiter. The balloon was flown by John Wise from Lafayette to Crawfordsville, Indiana, on August 17, 1859. There were 123 letters eventually mailed this way, and as of 1980, 23 were still known to exist.”
Image above upper left – The Scott #C54 issued for the 150th anniversary of the flight, 1959 7c Balloon Jupiter stamp.

My local stamp club friend Jimmy was able to share with me about the Jupiter #C54 stamp above and shared a story of similar interest here locally in Wilmington, North Carolina with the First North Carolina airmail flight.

Hearing this story told to me over the phone by Jimmy with his enthusiasm of sharing local postal history brings such a big smile to me – especially when he shares the mailbag was literally dropped from above!

It was then retrieved by the awaiting postal clerk below – all for the promotion of having been up in the air for three miles in 1912!

“The first authorized official airmail flight in North Carolina was to have taken place in Wilmington on January 1, 1912. Bad weather on the 1st prevented the flight from taking place. The next day the weather cleared and pilot, Walter Brookins took off from Highwood Park Race Track in his Wright-Breguetaeroplane carrying a mailbag with approximately 1,600 pieces of mail (canceled on January 1, 1912).
Brookins flew approximately three miles and dropped the mailbag over Winter Park.
The bag was retrieved by a postal clerk and transported to the post office by automobile for further dispatch in the postal system. Wilmington Postmaster, Thomas E Wallace authorized the establishment of the postal sub-station at Highwood Park Race Track and the transport of the mail by air.  … There was at least one earlier so called airmail flight in North Carolina but is was not authorized nor participated in by the U. S. Post Office Department.”

This image is a scan of a January 1, 1932 (20th anniversary) commemorative cover.  You will notice that the envelope cachet design does incorporate part of the original 1912 cancel. It is from the collection of Jimmy Jordan, sponsored by the Wilmington Chamber of Commerce and signed by Louis T. Moore. For those of you into envelope cancels, this cancel is not a special cancel just a normal Wilmington cancel. 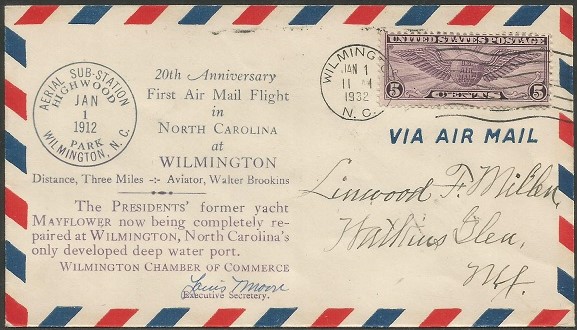 Thank you for joining me today for Jupiter Balloon Airmail Flight and 2012 100th Anniversary First North Carolina Air Mail Flight.  Here’s to having fun discovering items of interest in our own backyards – with envelope pictorial postmark cancels and cachet covers too!

Images above of both envelope cancels and excerpt – from My stamp club friends, Jimmy Jordan, and Richard Porcelli for his beautiful envelope cancel design Wilmington Philatelic Society (WPS).