Today we are looking at the Linn’s Stamp News very informative article on Great Britain’s Royal Mail Commemorating the 75th Anniversary of D-Day with 11 stamps along with ordering information. “Six of the stamps are in three vertical se-tenant pairs. The other five are in a souvenir sheet that focuses on the five beaches.”

Furthermore, I’m including, in case you missed the story Linn’s was running last week on Where is the U.S. D-Day 75h anniversary stamp?

First, there is the must-read article at Linn’s on the six stamps in Great Britain issuing today and a souvenir sheet: “Britain remembers D-Day on stamps showing scenes of the WWII invasion” (June 6, 2019) by Denise McCarty. 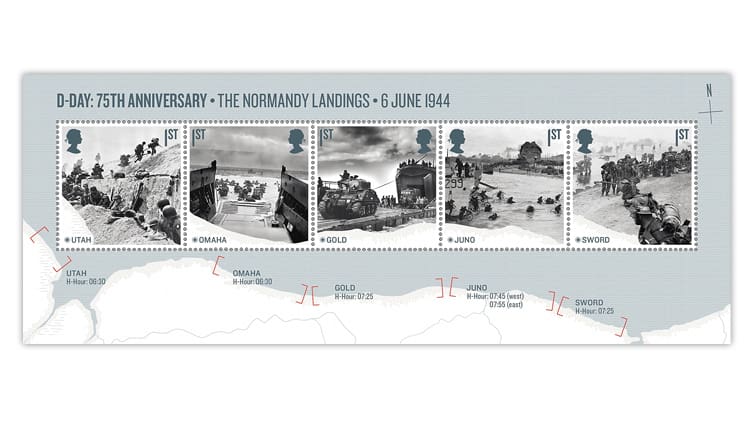 “Among the related products are first-day covers; 12 postcards reproducing the designs of the 11 stamps and the souvenir sheet; and a presentation pack with the stamps, the souvenir sheet and text by experts from Imperial War Museums.”

The article concludes with the detailed information on ordering them.

—Addendum inserted begin:—
This is a screenshot of the top part of the page D-Day 75th Anniversary | 2019 – Royal Mail | Shop

Please note, it will let me add to a shopping cart but will not let me place order. Stay tuned!

Where is the U.S. D-Day 75h anniversary stamp? Linn’s Article

In it the image of the D-Day stamp commemorating the 50th Anniversary is shown; the stamp is in my June 6, 2016 post: D-Day Stamp and Letters written after D-Day.

“Great Britain’s Royal Mail and a few other postal administrations are issuing stamps this year to commemorate the 75th anniversary of D-Day, the Allied invasion of German-occupied Normandy on June 6, 1944.

But the United States Postal Service, as of this writing, has not announced a stamp for the anniversary…”

In addition, I’m closing with links to these previous AnchoredScraps posts: June 6, 2015 Letters written after D-Day; and Photographed Letters on Wings V-Mail book 6-06-2018.

Thank you for reading today’s post with me as we honor their memory.