On this Sunday morning is a treat to write my Book Recommendation Billy Crystal 700 Sundays, written in 2005. The poignancy gets you right away when realizing the title refers to the number of Sundays he had before losing his dad at age 15.  Sundays were a big deal given his dad worked two jobs and so Sunday was “THE” day he got to see him.

This morning I hope you’ll pause, get your favorite beverage, and enjoy! 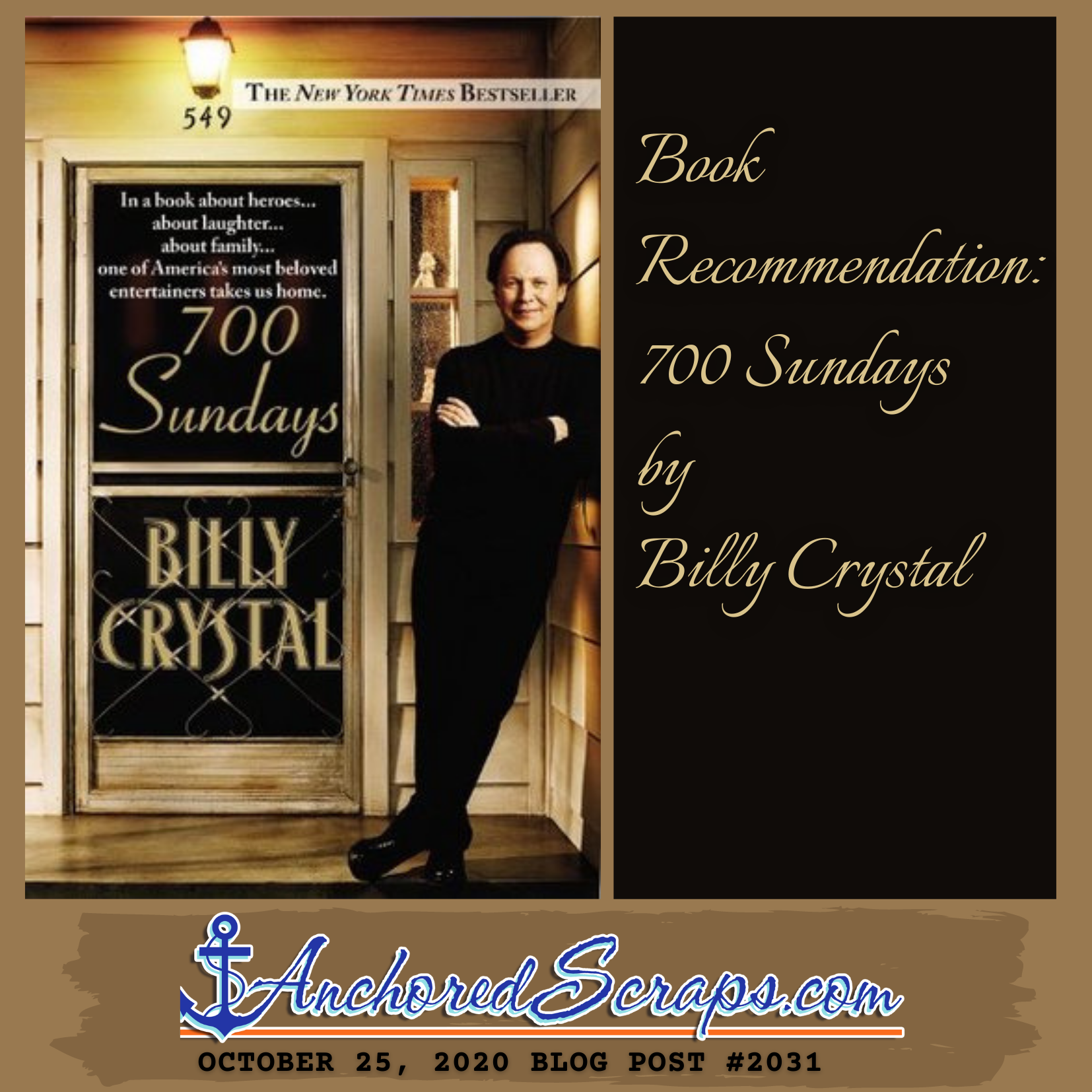 First, a note about Sending Condolence Cards this month

The month of October 2020 has found me sending out a series of condolence cards. There have been several friends who have lost their mothers. And now this week, several losing their favorite Uncle. I’ve found myself struggling with writing the right sentiment to include in the condolence cards. At times I’m feeling clumsy with my writing; however, I know it is better to follow through not only writing in the card but also SENDING the card. It brings to mind, how much it meant to me when receiving cards when we lost my Dad, over five years ago.

Today’s blog is one I’ve put off writing for some time. For me, to be writing about this book, I find it intertwined with the realizations I have from my own writing experiences when recalling my Dad when I’ve shared about him here, if you are new to my blog, the inspiration for naming my blog was my Dad (and the story about it is in my first blog post) below.

Knowing how hard it is to capture the personal sentiments of one’s parent and recalling family stories finds me in awe of Billy Crystal. He won a Tony for his award-winning play. The book was first published in 2005. To have performed it live for nine weeks, and where I read over a couple of hundred times is amazing.

This past January I finally sat down and read the book and loved it. I followed up by ordering the DVD of his one-man show from HBO Television Comedy special in 2014. At the time 65 years old – yet able to do a cartwheel! It marked the 50th anniversary of losing his dad.

It was so much fun to read the evolution of his “shows” for his family. He grew up in Long Beach, Long Island, New York.  There are some wows throughout the book. He shares the first movie he watched was the movie, Shane, watching it with the legendary Billie Holiday, who would babysit him on occasion. The influence of jazz with his father co-founding Commodore Records, prior to big-box changing the business for independents; meeting Count Basie, Duke Ellington, Louis Armstrong, and Sammy Davis, Jr. .. his amazing mother … his love of baseball.

On an aside, I would be remiss if I did not point out that there are expletives sprinkled throughout the book.  I had to smile though, because I know I mentioned in my Dad’s eulogy he could use an expletive with the best of them.

I hope you are able to read the book. For me, I’m glad I read it prior to watching the DVD.

Some of my favorite Billy Crystal Roles

If we think of some of his roles, I still remember while I was away at college, the ABC sitcom came out, “Soap”. It included Billy Crystal in the cast with the role of Jodie Dallas. When I would come home for a visit during college breaks, Dad would be howling with laughter on the couch from watching a current episode of Soap.

Of course, there is When Harry Met Sally.  I love Billy Crystal as Miracle Max in The Princess Bride. (The movie also had Peter Falk, from Columbo, in the cast).

Furthermore, if you have ever found yourself being the one to read off all of the road signs while in the passenger seat, you’ll smile if you recall the scene from the movie, Forget Paris, where Billy Crystal is driving Debra Winger’s senile dad around and he reads off all the signs or when reading the newspaper he repeats the ads over and over.

My sincere thanks to Billy Crystal!

In closing, wishing you a great Sunday. We are one week away from Daylight Savings ending. Here’s to a great rest of the weekend and a new week ahead. I’ll see you back here on Wednesday!

Attribution and thank you to the following referencing today

YouTube You asked for it, you got it, Toyota posted by Bralynn Bell