We have the 2014 movie Signed Sealed Delivered for Christmas in July as our theme this Wednesday morning.  Today’s blog post is a bit longer than usual, grab your morning beverage of choice and enjoy! 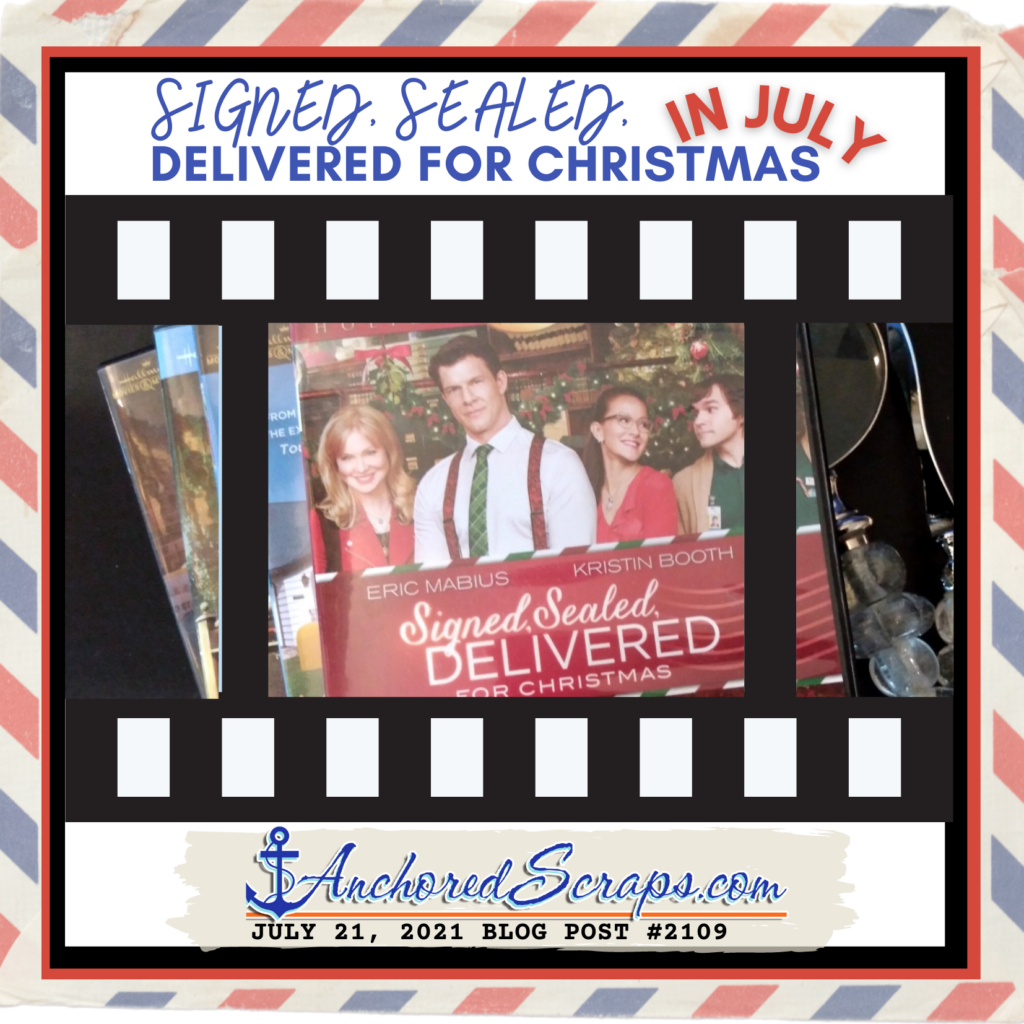 Watching it last night for the first time now finds me with a new Christmas movie on my favorites list!

We have not previously covered any of the Signed, Sealed, Delivered series by Hallmark Channel; it showcases the ensemble team of four postal detectives from the Dead Letter Office for the post office in Denver. Calling themselves The POstables – the premise follows them as they “track down intended recipients of undeliverable mail.”

Thanks to my Mom who originally sent me three of the DVDs for a Birthday present a few years ago. Adding to it, I ordered the Pilot on DVD. This was before I could find the pilot available online for streaming. My four DVDs are the Pilot, Season 1 the complete series (which has ten episodes), For Christmas, and From Paris With Love. According to IMDb there are twelve movies in the Signed, Sealed, Delivered Series.

One does not have to own the DVDs to view them. Over on Amazon, they have the PILOT along with the ten episodes available for streaming; starring Eric Mabius, Kristin Booth, Crystal Lowe, and Geoff Gustafson.

In addition, to view this movie, it is showing available with “Hallmark Movies Now” for $5.99/month AFTER a 7-day free trial. I’m thinking out loud here, one could in theory get the trial, cancel immediately, and then binge-watch them.  Personally, I do not have a Hallmark subscription at this time.

Next, while the back of my DVD shows this as 2014, over at the Hallmarkmoviesandmysteries Signed, Sealed, Delivered listing of its movies, it shows the Original Airdate: November 23, 2015. They have a 30-second PREVIEW at this link.

Let’s begin with the IMDb excerpt: “When the beloved quartet of postal detectives discover an urgent letter written to God on Christmas Eve, they delay their own plans to help a little girl whose mother’s life hangs in the balance.“

Next, here in my own words is what I loved about this movie featuring Oliver, Shane, Rita, and Norman. Their detective work of finding who sent a Letter to God takes them on a journey; each poignantly having their special individual Christmas wishes granted in the course of the movie. Here’s a hanky alert as it will sneak up on you as they end up putting on a real Christmas pageant at a Hospital with its own Christmas miracle.

In addition, there is an adorable service dog that gets recruited to be a sheep in the Christmas pageant.  And for those of us who remember the TV show, Happy Days, Mrs. Cunningham, (aka “Mrs. C”) Marion Ross makes an appearance too.

Seeing the Signed Sealed Delivered Christmas movie did have me thinking of one of my favorite Christmas episodes from “Touched by An Angel”, “Fear Not!” with a Christmas pageant in the plot too, and for good reason, the “creative force” behind the series and movie franchise is from Martha Williamson, executive producer of “Touched By An Angel”.

Here’s an opportunity to share with me your comments about the movie. It will be open until Monday at 5:00 PM. This way, it gives you through the weekend for viewing it.

This poll is no longer accepting votes

Lastly, if you have been wanting to do some Christmas in July letter writing preparations, I’m suggesting begin with watching this movie! Whether you are wanting to get a head start on reviewing the ever-changing Christmas card list, going ahead and ordering the Christmas Photo cards NOW, or even addressing the envelopes for the cards now, I applaud your early-bird enthusiasm! Furthermore, it is also fine to just THINK about getting ready for Christmas and enjoy the movie!

Here’s to our Christmas in July best of intentions!  See you back here on Sunday.

Attribution & Thanks to Hallmark Channel, images showing above, and IMDb

You may also enjoy AnchoredScraps “The Best Christmas Pageant Ever”, December 8, 2015