Did you ever get around to reading the series of Travis McGee novels by John D MacDonald ?

Today is my Dad’s birthday – it is my first one without him, he would have been 86 years old.    I’m remembering that while I was in high school Dad encouraged reading a LOT of books and it included being introduced to the world of Travis McGee – there were 21 novels in the series with the first adventure in the series published in 1964.  They were all in paperback and the titles would include a color i.e. “The Deep Blue Good-by”.

It was fitting that earlier this week Dad’s Typewriter returned to my home all spiffied up as I envision these books were written at the John D. MacDonald’s typewriter.   Looking back I remember being fascinated with the character and the recurring theme of him being dismayed at the over-commercialization of Florida – ahead of his time.

In the blog post from April of this year – “The Chronology of the Travis McGee Novels” –  it is a great post by a reader of the works of author John D MacDonald (1916-86) for over 40 years.   “In 1981 I had the privilege of assisting Walter and Jean Shine by doing research for a second edition of their definitive Bibliography of MacDonald’s novels and short stories. John was an incredibly prolific author of primarily crime and mystery fiction and, between 1946 and 1986, published nearly 400 stories and over 65 novels.” 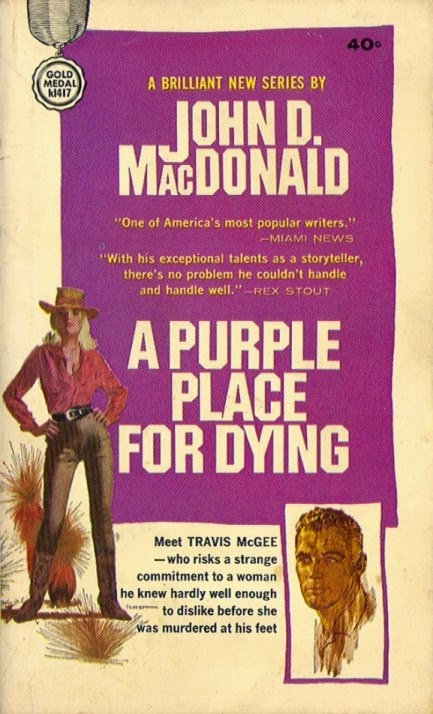 From The Thrilling Detective Website there is a very thorough posting about Travis McGee which includes some links to related sites.  If you only click on one of these links today this is the link I would click.

Colourful TRAVIS MCGEE is taking his retirement on the installment plan, working when he needs to. He lives on his “yacht,” The Busted Flush, a 52-foot barge type houseboat with twin diesels, at the Fort Lauderdale marina and lives the good life, all financed by his job as a “salvage consultant.”

What he actually does is recover missing or stolen goods for half their value, operating in the gray area between black and white, ocassionally accompanied by his best friend and next boat neighbor Meyer, a respected economist.”

If you haven’t read any of these books or are wanting to re-read then this site Travis McGee & Me – Reflections on the Man from Slip F-18 by D.R. Martin – Say Hello to Travis McGee has some suggestions:

“Do you need to begin at the beginning, with 1964’s The Deep Blue Good-By? I didn’t, the first time through. But if you’re methodical about such things, maybe it’s a good idea. I think it’s safe to say that if Blue strikes a chord with you, you’ll like what follows. Otherwise, my advice is to just pick a color—all McGee titles feature colors—from the early or middle books. That would include Blue, Pink, Purple, Red, Gold, Orange, Amber, Yellow, Gray, Brown, Indigo, Lavender, Tan or Scarlet. My particular favorites in that group are Blue, Gray and Lavender. Then sit down and be transported to the heart of the 1960s, to Slip F-18, Bahia Mar, Ft. Lauderdale, Florida.”

And he talks about their availability:

“Happily, every one of the 21 McGees is still in print.  You can get them new through Amazon, Barnes & Noble, Borders, or any retail bookstore.   And because millions of copies of JDM’s books have adorned book racks since the 1950s, the McGees and his 50 other paperback novels are often available in used bookstores and online for far less than the usual eight-buck cost of a new paperback today.  I found many of mine for a buck each, some for as low as 25 cents.”

It was news to me to read in a 2013 Washington Post Opinion post-  The John D. MacDonald novels, reissued By Jonathan Yardley: “Among the non-McGee novels, only “Cape Fear” has remained more or less steadily in print, no doubt because of the deliciously terrifying 1962 film adaptation starring Gregory Peck and Robert Mitchum and the somewhat less successful 1991 remake with Robert De Niro and Nick Nolte.”  That article also talks about how the books are being reissued by Random House and are also available as e-books.

I’m thinking of going back and re-reading some of these classics of John D MacDonald.  And I am considering taking on rounding up all 21 in the series – I recall over the summer I saw a few of them in one of the used book stores locally that I like to pop into and see what they have since last visiting.   In chatting with Mom this morning I asked what had become of Dad’s Travis McGee series and she shared several years ago when they were decluttering the entire series were donated to their local library.   We did get to give a virtual “toast” to Dad over the phone lines this morning with our virtual glasses of orange juice raised in the air remembering him.   Happy Birthday Daddy!

Blog post and image (above) of Cover of “A Purple Place for Dying” by John D. MacDonald- “The Chronology of the Travis McGee Novels” Monday April 6, 2015 by Steve Scott on the “The Trap of Solid Gold” website – Celebrating the works of John D MacDonald.

Website – ThrillingDetective   – lists all of the novels by the Author including   Travis McGee – created by John D. MacDonald (1916-86)

Website – Travis McGee & Me – Reflections on the Man from Slip F-18 by D.R. Martin – Say Hello to Travis McGee