On December 5, 1963 the movie “Charade” was released and somehow prior to writing this blog I had not seen it!

Back in September it was called to my attention from my stamp club friend that it was his Favorite Stamp Movie and I have to agree its mine now too!

Have you ever watched it?  And what does it have to do with stamps?  Not to give the plot away let me just say you need to watch the movie.  Not only are Cary Grant and Audrey Hepburn in the movie together but each of them have also had their own U.S. stamp featuring them! 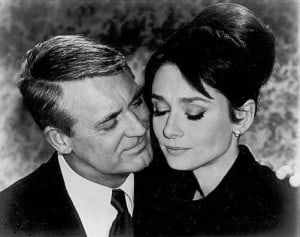 Given today is #288 of daily blog posts since launching AnchoredScraps.com back in February, I have been pulling in blog topics that have been under development by me and making sure to get some of them posted here before reaching blog post #300.     The movie is a joy and since receiving that email – he had emailed in reply to my blog post on Stamps category featured on Jeopardy and recalled the movie – since then there have been other AnchoredScraps.com blog readers who shared with me be sure to see the movie “Charade” too!

Both of them were featured in the Legends of Hollywood Series Stamps by the U.S. Postal Service: Cary Grant 2002 issue, and Audrey Hepburn 2003 issue.

The movie “Charade” stars Cary Grant and Audrey Hepburn, and includes Walther Matthau and James Coburn; it was filmed on location in Paris.     The movie was noted to “contain influences of genres such as whodunit, screwball and spy thriller; it has also been referred to as “the best Hitchcock movie that Hitchcock never made,” as he never made a screwball thriller”.  Apparently the movie got published with an invalid copyright notice and entered the public domain here in the U.S. “immediately upon its release”.

It was interesting to read that “Cary Grant (who turned 59 during filming) was sensitive about the 25 year age difference between Audrey Hepburn (33 at the time of filming) and himself, and this made him uncomfortable with the romantic interplay between them. To satisfy his concerns, the filmmakers agreed to add several lines of dialogue in which Grant’s character comments on his age and Regina — Hepburn’s character — is portrayed as the pursuer.”

Thanks again to my stamp club friend for first calling this movie to my attention.    If you haven’t already seen the movie yet I hope you will make the time and see it soon!  During this Holiday Season my plans include watching this movie again while wrapping some Christmas presents… but probably won’t get much wrapping done given its Cary Grant & Audrey Hepburn and that Givenchy wardrobe of hers in the movie! Enjoy!

Image shown above of Audrey Hepburn and Cary Grant from the movie Charade.  By User BlueStar on en.wikipedia [Public domain], via Wikimedia Commons.

Image shown above of 2002 U.S. Stamp 37cents Cary Grant (#3692) from the Legends of Hollywood Series as shown on Mystic Stamp Company website. @USPSStamps

Image shown above of 2003 U.S. Stamp 37cents Audrey Hepburn (#3786) from the Legends of Hollywood Series as shown on Mystic Stamp Company website. @USPSStamps

AnchoredScraps.com blog post: “Did you see Stamps category on ‘Jeopardy!’ ? Thanks to Linn’s Stamps News” September 22, 2015 by Helen Rittersporn.